Blast from the Past: Webley Mark VI Revolver

A reader shares his World War I era handgun 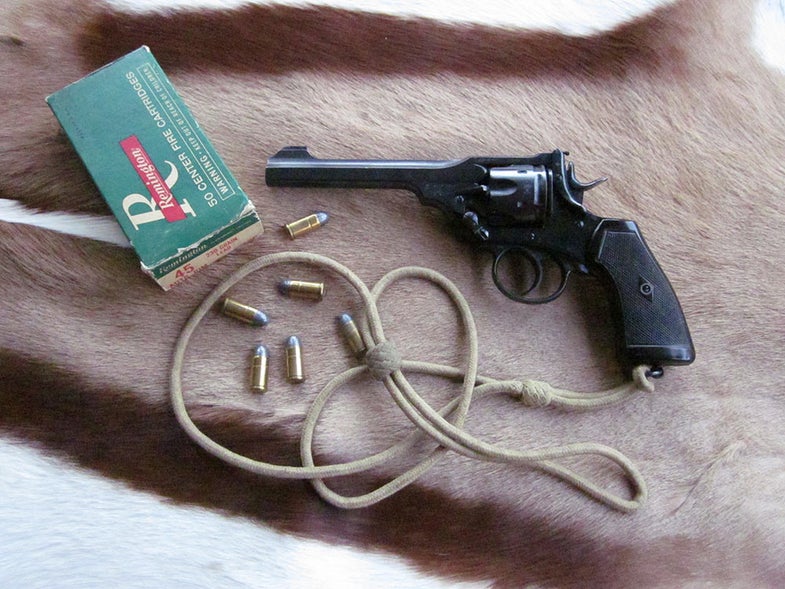 The Webley Mark VI, chambered in .455 Webley. From NRVO
SHARE

The Webley .455 revolver was first issued in the late 19th century. In Marks I-VI, it served the British military through World War II. The .455 cartridge began as a blackpowder round, launching a .45-caliber bullet at velocities as low as 600 fps. In 1897, it was first loaded with cordite. Fiocchi and Hornady load .455 Webley ammo today.

The Webley Mark VI in this image is a genuine WWI veteran. This Mark of the big Webley top break military revolvers was introduced in 1915, and this example is marked with that date, so it’s an early production model. Tens of thousands of Webleys were imported to the U.S. in the 1950s and ’60s as Britain was rearming with more modern weapons, and sold here at prices that make one weep today.

The Mark VI was chambered for the .455 Webley round, a rimmed caliber first used in the mid to late 1880s. It fired a heavy (265-grain) lead bullet at moderate velocity; despite not being a “speed demon,” it had a lot of punch and established a sterling record as a man-stopper in combat. Because .455 Webley ammunition was hard to find in the U.S., most of the post-war imported guns chambered for it were altered by the simple expedient of milling off the rear of the cylinder to increase headspace. This allowed use of the .45 ACP in special clips. In 1920, the Peters Cartridge Company brought out the “.45 Auto Rim,” essentially a rimmed version of the .45 ACP, whose thick rim allowed it to be used in the Webley without special adapters. The .45 Auto Rim is a “kissing cousin” of the .455 Webley with ballistics similar to it and the .45 ACP.

Top-break revolvers in the U.S. aren’t highly regarded, but the military Webleys are not your average bureau-drawer gimcracks. They’re big, tough, accurate, and hard-hitting combat weapons that served the Empire for decades and continue to soldier on.

Thanks to NRVO for the sending in this old warhorse. Keep the gun pictures coming to fsgunnuts@gmail.com.