Blasts From the Past: Harold S’s Drilling 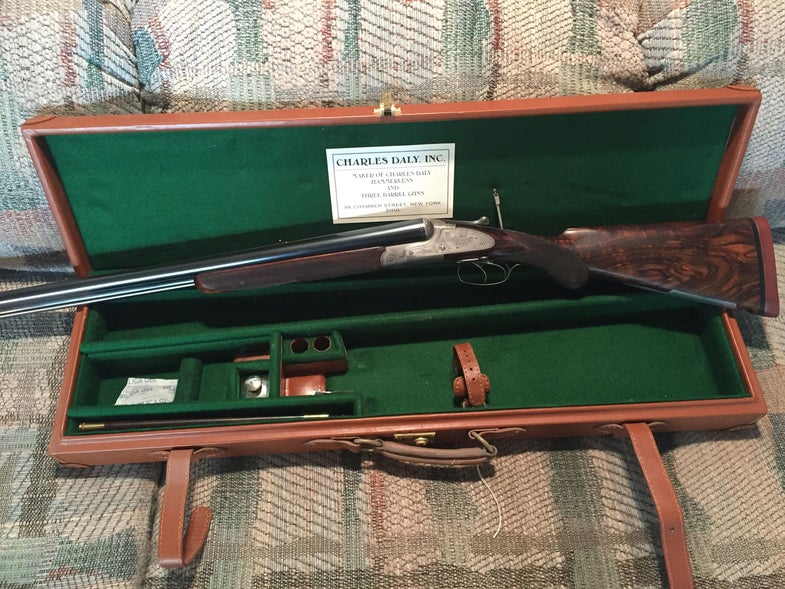 Drilling has nothing to do with “drilling” game with a bullet, although the gun will do that. It’s “triplet” in German. There are also vierlings, with four barrels, and no doubt there is a five-barreled fünfling or two somewhere, but drillings are more common. Almost always, the drilling has two shotgun barrels and a rifle barrel, although some have a shotgun barrel and two rifle barrels of different calibers. They are guns for the hunter who wants to be ready for anything, and they fit into the German style of hunting, in which hunters surround a woodlot and shoot everything that runs or flies out of it.

Incidentally, the Luftwaffe issued drillings by the same maker as this gun, and almost as beautifully finished, as a survival gun in World War II. Each came in a fitted case along with 20 Brenneke slugs, a 20-round box of 9.3x74mm rifle cartridges, and a box of shotshells, as well as a cleaning kit and, because it was the Germans, a 32-page instruction manual.

This is my Charles Daly drilling. I bought it a few years back, when I found it languishing in a rifle rack in the back of the store. I had to do some serious haggling with the man who put it on consignment in order to get the price down to what I could afford. Charles Daly, originally Schoverling, Daly & Gales, marketed drillings in the USA from the late 1800s up to the 1930s. This particular gun was made by Sauer & Sohn and is chambered in 2 x 12 gauge over a .257 Roberts rifle. The side plates and small metal parts are covered with fine-line scroll engraving. The screws are indexed, naturally, and the side plates also sport indicators showing if the locks are cocked. The wood is exhibition grade European grade walnut checkered at about 22 lines per inch. The fit and finish are flawless. It came with the carrying case shown that also had nickel-plated snap caps and an oil bottle, as well as a wood (ebony?) cleaning rod with brass joiners. Needless to say, it’s the finest example of the gun-maker’s art I’ve ever owned.

I was intrigued by the gun’s history, so I started researching. Besides the Internet, I got significant help from the Cody Firearms Museum and the German Gun Collector’s Association. I learned that this gun was probably built around the turn of the 20th century. Its original chambering was surely 12 gauge over .30/30. The shotgun barrels could have been Damascus. Anyway, in 1957, whoever owned it sent it back to Charles Daly to have it re-barreled to what it is now. Daly sent it to Austria (Sauer & Sohn was just starting to recover) for the work. The carrying case probably dates from that time. So, how does it shoot? I have no idea! It’s just too valuable to risk shooting it, so it is, and will remain, a safe queen. As a last note, the original gun went for $600 around 1900. That was twice the yearly income for the average worker of the era, so this was for the one percenters of the time.

Me, I’d shoot something with it, just to say I did, but I can respect Harold’s choice, too. It’s a beautiful example of Teutonic gunmaking. Thank you, Harold, and to everyone else who has been sending pictures to fsgunnuts@gmail.com. We can always use more.