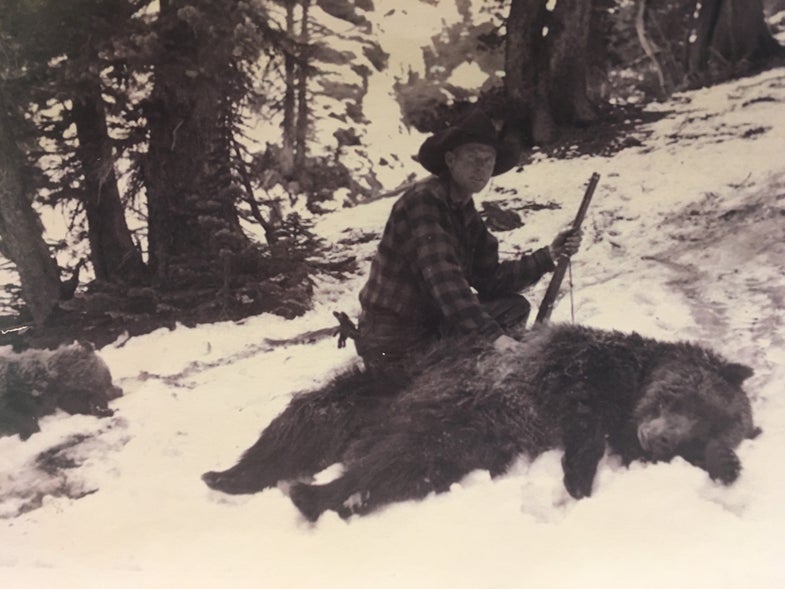 Doug's grandfather, his Model 94, and the two bears he took with the gun. From Doug
SHARE

Today, Blasts From the Past showcases one of America’s favorite rifles in one of its oldest calibers. The first Winchester Model 94s were chambered for.32-40 and .38-55 blackpowder cartridges. The next year, 1895, new nickel-steel barrels made the 94 strong enough for smokeless powders, and the rifle was offered in .25-35 and in the cartridge it’s best known for, the .30-30.

The .25-35 was, and still is, a fairly short-range medium-game cartridge. From the 1940s until 2005 there were no factory rifles chambered for it, until Winchester brought back the Model 94 in .25-35. It’s still offered today.

If it weren’t for this rifle I probably never would have been born! My granddaddy was a trapper, outfitter, and rancher between Cody, Wyoming, and Yellowstone Park. He carried this Model 94 in .25-35 while trapping. It was his favorite rifle. It didn’t kick, he knew where it would hit, and he was fully aware of what it could do if used properly. He hunted everything that could be legally hunted at that time in that part of Wyoming, which means just about anything that walks in North America. While in the Thorofare he came around a downed tree and was face to face with the grizzly sow and sub-adult cub pictured above. His fast, dependable rifle made the difference and kept him safe, which is why I may owe my very existence to this rifle.

My uncle was kind enough to give the Model 94 to me this year, and it still shoots as well as it ever did. This Montana whitetail dropped as fast as anything I’ve shot with a Weatherby, and it’s proof that shot placement and a handy rifle can equal a magnum at woods ranges. This is hands down my favorite rifle. It was the first rifle I ever held and, God willing, it will be the last. I look forward to seeing my son take a deer with it too someday.

Note the patina of age on the 94, displayed above with a whitetail and Doug’s son, its future owner. As I may have mentioned before, I feel about Fat Man and Little Boy the way Doug feels about his grandfather’s 94, and it’s much better to be able to attribute your existence to an heirloom rifle than nuclear weapons. An old classic lever-action is a lot easier to love.