Blasts from the Past: Type 94 Nambu Pistol

One of the highlights of my grade school show-and-tell was the day my friend Matt brought in the Nazi sword... 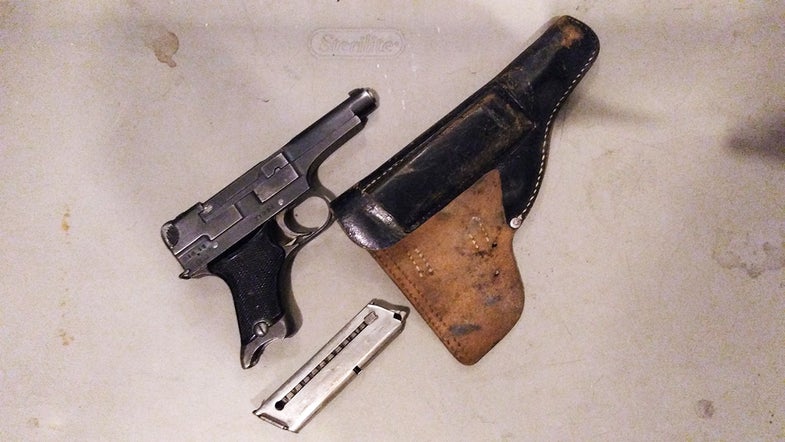 One of the highlights of my grade school show-and-tell was the day my friend Matt brought in the Nazi sword that his father had brought home from WWII. Matt pulled it out of the scabbard and waved it around and talked about how his dad got it from some graves registration guys. I am fairly certain you couldn’t do that in most schools now.

So, today we’ve got the next best thing, a special WWII trophy edition of Blasts from the Past. The trophy is a Type 94 Nambu pistol, standard issue to the Japanese army from 1935 to 1945. It had a six-round magazine chambered for the 8mm Nambu cartridge, which was roughly the ballistic equivalent of a .380.

Scott’s Type 94 My wife’s grandfather brought this back from his tour during WWII. He was never really in the middle of any action so I always wondered how he came to possess it. A collector that I found online said there’s a good chance this one belonged to an officer because of the aftermarket custom holster. She said that the military issue ones were cheap and flimsy and if the soldier had enough money he would have a better one made. Usually, you had to be an officer to have enough money to pay for one. Anyway, it’s an interesting piece of history. It was nicknamed the “suicide gun” either because of its exposed sear or because so many Japanese soldiers committed suicide with one rather than being captured.

The exposed sear of the Type 94 that Scott refers to is a long bar on the left side of the pistol. By pressing it, on purpose or accidentally, you can make the Type 94 go off without touching the trigger. It is not clear whether that was supposed to be a feature of the gun, or if it’s a glitch, but many call it among the worst firearms ever made because of it.

Please keep the old gun pictures coming (and “old” is a relative term. We’re open to everything here) to fsgunnuts@gmail.com

Blasts From the Past
Firearms
gun history
Guns
Handguns