Stop me if this is too personal, but do you like to do it vertically or horizontally? Easy, hoss. I’m... 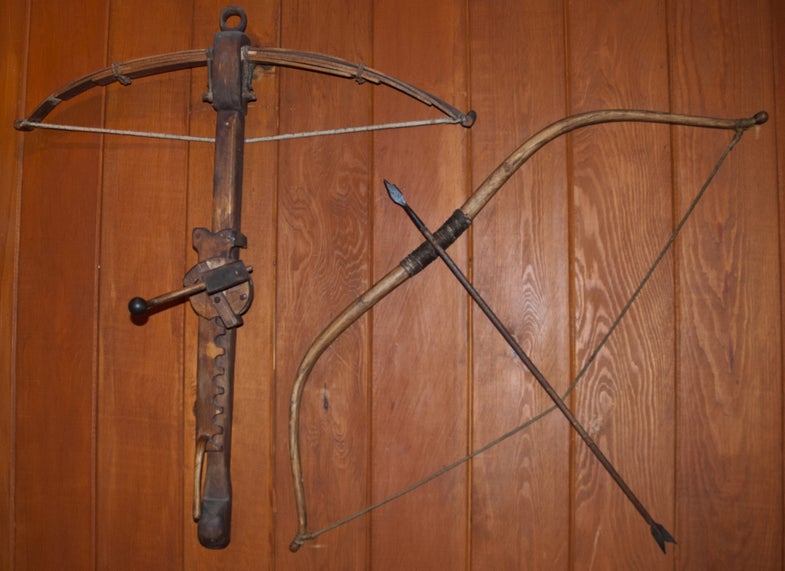 Stop me if this is too personal, but do you like to do it vertically or horizontally? Easy, hoss. I’m talking about shooting a bow.

Some of my best friends shoot crossbows. They allow people who, for whatever reason, can’t use regular bows—oops, I meant “vertical” bows, which is the politically correct term—to hunt during archery season. More hunters mean more licenses and more money to state DNRs. Which means more habitat protection and, one hopes, more huntable land. More hunters also means more people who will fight for the rights of hunters. I’m totally a big-tent guy as far as crossbows go in that sense.

Crossbows aren’t new. They date from about 600 B.C. (Before Carbon). Before them, according to Wikipedia, “The traditional bow and arrow had long been a specialized weapons system which required a considerable degree of lifetime training, physical strength and expertise to operate with any degree of efficiency.”

Here’s the part I found interesting from that entry: “…in many cultures, despite being usually drawn from the common class, bowmen were considered a separate and superior caste.”

If you think I’m going to pass up the chance to up my social standing to “separate and superior,” you’re in for a surprise.

At the moment, my enhanced status is sort of iffy. This is because I’m rehabbing a rotator cuff injury sustained from overshooting my compound one day last year. I do a whole bunch of exercises, many of which focus on the muscles around my shoulder blades (aka my scapulas, or scapulae, if you’re trying to impress people, which I totally am) so I’ll be able to hunt with my compound this fall. I may have to drop my draw weight from 60 pounds to 50. Which, for reasons I can’t explain, would once would have been unthinkable. Sixty was the minimum you could pull and call yourself a “real” bowhunter. My standards have changed since then. Now the minimum is however much I can pull.

The day is coming when I’ll have to surrender to the crossbow. But it’s not here yet. And, sure, I’m as status-hungry as the next guy. I love being special, being part of an elite group.

But that’s not the whole story. I’d want to shoot a compound even if it didn’t improve my status. A crossbow is a point-and-shoot weapon, the rudiments of which are easily picked up in an afternoon. Once you’ve got that down, you don’t need to practice much. Whereas shooting a vertical bow is a skill that, at least in my case, requires constant practice. Especially if I’m to shoot beyond 30 yards. I like a weapon whose skills have a short shelf life. It gets you out there practicing. It gets your head in the game even when you’re not hunting.

I guess what it comes down to is this: To me, there is no poetry in a crossbow.