There are only a few books on guns that are worth a damn, and to make matters worse they are... 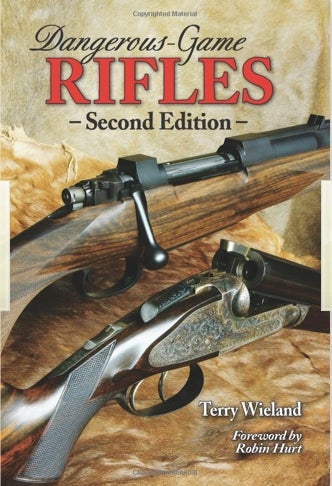 There are only a few books on guns that are worth a damn, and to make matters worse they are rarely updated* and become less valuable over the years. Such is the case with Warren Page’s The Accurate Rifle (1973) or Jim Carmichel’s The Book of the Rifle (1985)–still eminently worth reading, but now quite dated.

Happily, this is not true of Terry Weiland’s Wieland’s Dangerous-Game Rifles. It appeared in 2006, established itself as the definitive work on the subject, sold out its first printing, and then sold out a second printing. Now, Terry has done a complete revise, which is not only up-to-the minute, but more complete than the original.

Wieland is a writer of the first magnitude, and his book is an irresistible combination of nifty (and mostly very expensive) machinery, high adventure, gore, lots of excellent photos, and plenty of very sound advice which you can use even if you never hunt anything bigger or more dangerous than whitetail deer. He is careful, scientific, does not rely on hearsay, rumor, or innuendo, and lets you know if he does not know something, which is almost unheard of in this business.

DGR II also contains one of the best quotes on marksmanship that I’ve ever come across:

“A good shot is the man who shoots well when he is shooting badly.”–Major J.E.M. Ruffer

Real-world price is around $29 from Barnes & Noble, Amazon, and the usual suspects. It’s published by Shooting Sportsman Books.

*If you’d like the experience of writing a book and then revising it without going to the trouble of actually doing so, gouge out your right eye with a rusty screwdriver for the sum of $34.88. Then gouge out the left one for $12.09.