A Minnesota tournament angler was recently stripped of her win because she culled fish during the tournament. So what, right?... 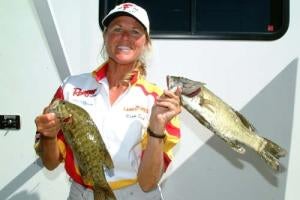 A Minnesota tournament angler was recently stripped of her win because she culled fish during the tournament. So what, right? Everyone culls their fish in a tournament, right? Well, not when the tournament is being held on waters in which culling is illegal.

From this story on Twincities.com:
Karen Savik, arguably Minnesota’s most successful and well-known woman pro bass angler, can still feel the jubilation of winning last month’s Toyota Tundra Bassmaster Weekend Series Championship on the Mississippi River at Winona. “I was fishing against some real river rats, and I beat them all,” the St. Louis Park native said of the field of more than 50 experienced anglers, all men, in the Sept. 18-19 tournament. Savik, 55, won, in part, by using a tournament strategy called “culling” or sorting the bass that went into her boat livewell. If she caught a bass bigger than one already in her box, she released the smaller fish, thus increasing the overall weight of her catch. She caught 10 bass weighing 31.28 pounds to beat runner-up David Ham of White Bear Lake by nearly 3 pounds and win $2,500. In a news release from American Bass Anglers (ABA), which conducted the tournament, Savik was described as “winning one for the ladies.” She was quoted as culling her catch 14 times in two days.

_That’s when her trouble began. Although culling is legal on inland Minnesota waters, it is not on Lake Mille Lacs and on the Mississippi River along the state’s border with Wisconsin. After the ABA news release appeared, another angler familiar with the rule, but not in the tournament, alerted the Minnesota Department of Natural Resources of Savik’s rule violation. After an investigation, the DNR fined Savik $130 for violating the no-cull rule.

Because she violated a state fishing law, the ABA disqualified her last week. The group named Ham the winner and now wants Savik’s $2,500 check. Ham said he knew culling was illegal on the river and didn’t use the strategy in the tournament. He said he didn’t remember being told that competitors were told they could cull. “It’s hard to take a win like this,” he said. “As far as I’m concerned, I’m still in second place, but they (the ABA) have rules.” Of Savik, he said, “I think she made an honest mistake.” But was it a simple case of breaking a fishing rule? Not exactly. Savik said she culled because the on-site tournament director told all the competitors that they could. Another angler confirmed he heard the same instructions before the event._

Sounds like a sticky wicket, doesn’t it? What’s your take?