The actual weight of this huge blue marlin caught off Cabo San Lucas, Mexico is still up for debate. But... 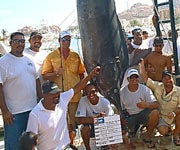 The actual weight of this huge blue marlin caught off Cabo San Lucas, Mexico is still up for debate. But after a 28-hour fight to land the behemoth, the tale of the catch is nothing short of amazing.

From this story on petethomasoutdoors.com:
_Some reports stated that a blue marlin landed Sunday is the largest billfish ever caught off Cabo San Lucas, Mexico, weighing an eye-popping 1,213 pounds. Others claimed the behemoth fell short of “grander” status, weighing only 972 pounds on a marina scale.

Whatever the weight of the billfish, it was an extraordinary catch, especially considering that the struggle to land the behemoth played out for nearly 28 hours, giving this yarn a Hemingway quality that seems more like fiction than fact.
_
_
The angler credited with the catch is Richard Biehl of Traverse City, Michigan, but he had help from the crew aboard the 31-foot yacht, Go Deep, which was plying the Pacific Ocean north of the resort destination on Baja California’s tip.

After an offshore marathon that began Saturday morning at 8:20 and ended close to noon Sunday, those aboard the yacht either resembled or felt like very old men of the sea.

“That was the hardest thing I ever did in my life by far,” Biehl told Pisces Sportfishing general manager Tracy Ehrenberg, who on Monday evening published the first detailed account of the remarkable episode. “I’ve shot bull moose and trekked out with 200 pounds on my back and it doesn’t even compare.”

Nobody knew what was in store when the marlin attacked a trolled lure at what is known as the 95 Spot and sped toward the horizon. They were fishing for much smaller striped marlin and using only 60-pound-test line — far too light for giant blue marlin.

When the great billfish first jumped, about 400 feet from the boat, the crew guessed its weight to be about 700 pounds.

Word of the catch didn’t spread until Monday, when many in town and in the billfishing community considered the catch to be a rumor. Then photos and sparse details began to appear on Facebook. One photo showed the weight at 972 pounds, but that did not tell the story…

… Abaroa told Ehrenberg that the marlin registered only 972 pounds because the hook of the electronic scale used to weigh the fish was not high enough for all of the fish to clear the ground, so a time-tested measurement formula — using length and girth — was used to determine the 1,213 pounds. The marlin measured 137 inches long, or 11.4 feet, not counting its bill or tail. It was 75 inches, or 6.25 feet around._

Weight records for marlin caught off Cabo San Lucas are not kept officially, but an 1,111-pounder caught in the 1980s is believed to be the heaviest.