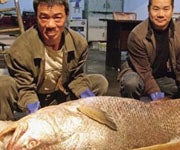 From this story on businessinsider.com:
_A Chinese fisherman has netted a fortune after catching a critically endangered, but hugely prized, fish worth £300,000 (That’s about $473,000 to us Yanks…). The fisherman, whose identity has not been revealed, caught a Chinese Bahaba, or Giant Yellow Croaker, off the coast of Fujian province last week. After a bidding war, a local fishmonger paid him three million yuan (£300,000) for the 176lb fish, or £1,700 a pound, according to the Strait News, a local newspaper in Fujian.

The fisherman told the newspaper he had found the fish floating on the surface of the sea and had “picked it up.” The size of the fish caught the attention of his fellow villagers, and the specimen was quickly identified. After the auction, the fisherman said he would use the windfall to buy a bigger boat._

According to the story, the Chinese Bahaba is prized mostly for its swim bladder, which is apparently used by traditional Chinese doctors to cure heart and lung ailments. But like pretty much everything else used in traditional medicines around the world, the bahaba has been fished almost to extinction, and those populations not wiped out by over harvesting have been mostly destroyed by that slight industrial pollution problem that China has.

So how valuable is the bahaba, which can grow to almost seven feet and over 200 pounds? Two years ago, one sold for even more than this one at over a half-million bucks. Which makes you wonder what the very last bahaba might be worth. If this fisherman did in fact find the prized fish, is anything ethically out of place here?