Here’s a bit of advice to any angler who catches a potential record-breaking fish and wants to keep it hush-hush:... 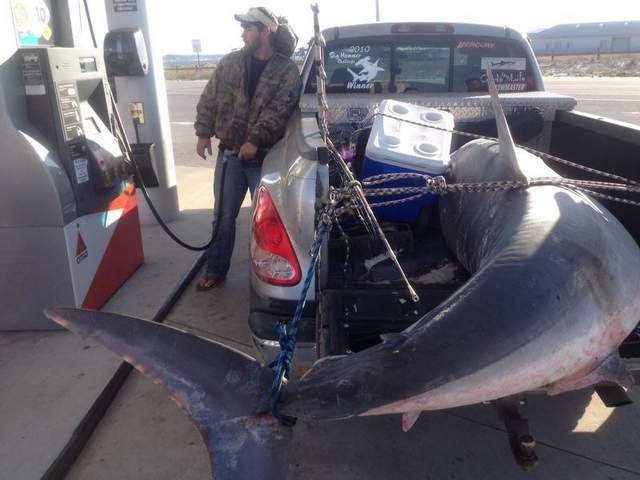 Here’s a bit of advice to any angler who catches a potential record-breaking fish and wants to keep it hush-hush: don’t leave the fish draped out in the back of a pickup truck while making a pit stop for gas in broad daylight.

Florida anglers Earnie and Joey Polk learned that lesson the hard way this week after they teamed up to land an incredible 11-foot long, 805-pound shortfin mako Tuesday night. They wanted to keep the catch a secret, but the shark exceeded their pickup’s bed capacity. A protruding dorsal fin and tail draped over an open tailgate attracted onlookers when the cousins stopped for fuel. A candid photograph of Joey at the pump landed on Facebook and has since gone viral.

Though the cousins told the Pensacola News Journal they’re keeping the exact location of their catch a secret, they did reveal that they hooked the shark off a Gulf Coast beach around 10:30 p.m. and fought it for about an hour before bringing it to shore.

This isn’t the Polks’ first tangle with a big shark. The two men have three combined world records from the International Land-Based Shark Fishing Association. Earnie caught an 11-foot-2-inch, 674-pound shortfin mako in 2009 and an 11-foot-9-inch, 928-pound tiger shark in 2010. Joey beat Earnie’s record a month later with a 12-foot-9-inch, 949-pound tiger shark. They claim to have caught more than 300 sharks from the shore in 2013 alone, tagging and releasing most to benefit the National Marine Fisheries Service’s Cooperative Shark Tagging Program.

While the Polks said they make it a practice to release the sharks they catch — including their two record tiger sharks — they said this mako was too exhausted to swim back out to sea. Earnie has submitted paperwork to the International Land-Based Shark Fishing Association for the shark to be considered the new world record shortfin mako.