Leandra Palmatier shot the gobbler of a lifetime last weekend in Montgomery County, New York. The double-bearded, melanistic (the opposite... 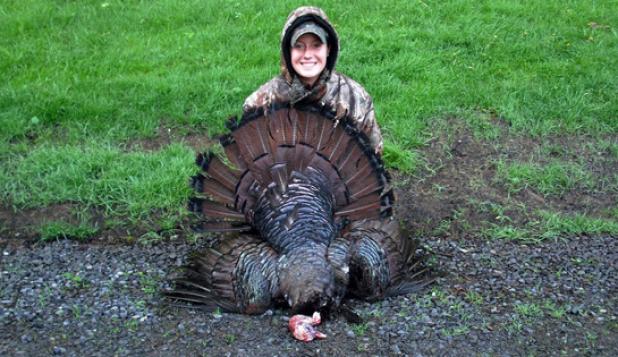 The double-bearded, melanistic (the opposite of albinistic) turkey showed up three fields away from Leandra’s set and sounded off when her boyfriend called around 5:15 a.m. “The bird was in the middle of the furthest field and we said, ‘No way is he coming in from 800 yards,'” she said.

Ten minutes later the tom was circling her strutter decoy.

“It was insane how fast it happened. Every time my boyfriend called the bird gobbled and was hundreds of yards closer. He never stopped moving once,” Leandra said.

She sealed the deal, and when they walked up on the bird her boyfriend noticed the black wings.

That night she texted a friend, Avery Prostaffer Arliss Reed. “I couldn’t believe it,” Reed said. “I texted her back immediately: ‘You need to mount that turkey!'”

While there isn’t much research on them, melanistic numbers are estimated at about one in 50,000, Vance said. That translates to somewhere around 100 to 150 black turkeys in all of North America.

“This is the first report on a melanistic we’ve had this year,” Vance said. “Usually we have a report every two years, but sometimes we go three or four years without hearing about a melanistic bird. They are by far the rarest of the color phases in wild turkeys.”

Leandra knew the bird was rare, but not that rare. “He lost a lot of chest feathers, so we didn’t save the whole bird, but we’re going to do something special with the wings,” she said.