Alabama Teen May Have Beaten State Bass Record, But Will Never Know For Sure

An Alabama teen is left wondering whether he possibly set the state largemouth bass record after he neglected to weigh... 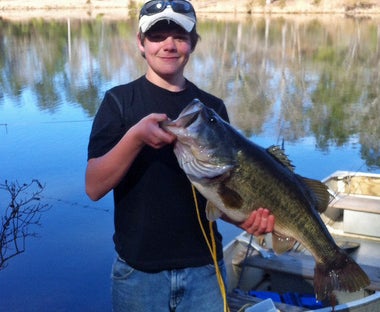 An Alabama teen is left wondering whether he possibly set the state largemouth bass record after he neglected to weigh a trophy on a certified scale before ushering it to a local taxidermist.

According to The Huntsville Times, angler Branson Linder was recently fishing a small pond near a Boy Scout camp when he cast near some underwater stumps and hooked the biggest bass of his life.
“I saw a tree hanging over the water and I cast under the tree,” Linder said. “On the second cast, I felt a little bump. I let him hold it for a minute, and then my line started leaving. I set the hook, and I had no idea what would be pulling for the next few minutes. Then the fish started pulling the boat around faster than a trolling motor.”

Linder though he might break the line so he started fiddling with the drag setting, but he went a little too far and almost lost the fish in the process. When he finally regained control of the fish, he said it tried to take to the air to spit the hook, but it was so large, it barely broke the surface.

“The first time I saw him my heart just about stopped beating,” Linder said. “I didn’t have any idea he was that big. Then he went back down and didn’t come back up until I brought him up to land him.”

On shore, Linder tried to weigh the fish, but his scales bottomed out at 14 pounds so he had no idea how much the fish actually weighed—or how close it might have been to the state record of 16 ½ pounds set in 1987. He and his father took a few photos before freezing the fish until a local taxidermist could pick it up. Weeks later, taxidermist Jerry Cochran called and said the mold for a 14-pound fish was much too small.

“I measured Branson’s fish at 33 inches long and 25 inches in girth, which is monstrous,” he said. “I think it was a potential state record. When I went back to check my scales, the battery was dead. I wish we had weighed the fish on certified scales. I’d love to know the exact weight.”

A local sporting goods store compared a replica model of the current state record to the measurements of Linder’s fish and believe the teen’s bass was larger, but because it wasn’t weighed on a certified scale, officials won’t consider it for the state record books.