In Illinois, wildlife officials believe that alligator gar may help fight the spread of invasive Asian carp, which are on... 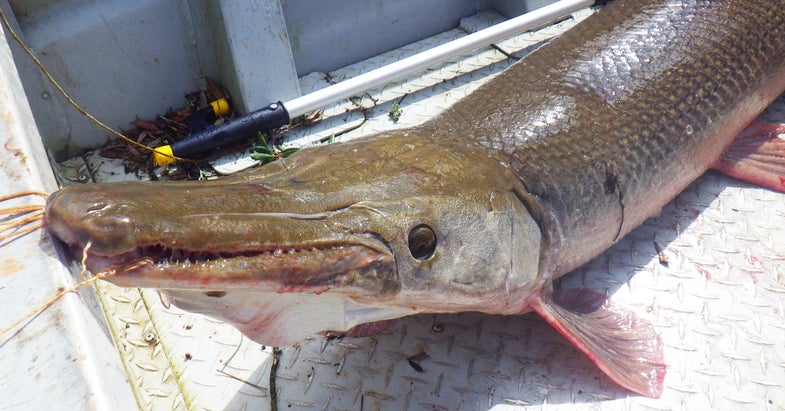 In Illinois, wildlife officials believe that alligator gar may help fight the spread of invasive Asian carp, which are on the invading the Great Lakes. Gator gar commonly feed on carp but pose little or no threat to game-fish populations, biologists believe. Also, despite the gator gar’s fearsome appearance, there has never been a confirmed gator gar attack on a human.

Jennifer Walling, the executive director of the Illinois Environmental Council, told the Belleville News-Democrat that alligator gar could be a potential solution to the Asian carp problem, in addition to being a trophy quarry. “The more we learn about alligator gar,” Walling said, “the more intrigued we are that they could help in the fight against Asian carp, drive revenue as a target of anglers, and become a popular niche food fish.”

According to wqad.com, biologists with the Illinois Department of Natural Resources are stocking gator gar in waters the species was long ago eradicated from. Earlier this year, Illinois legislators passed a resolution to encourage the DNR to continue stocking gator gars, following a two-year hold on the efforts, as well as to provide protections for the prehistoric-looking fish. According to the DNR, the stocking program’s primary goal is to provide anglers with a new trophy fish (gator gar can grow to more than 9 feet long and weigh 300 pounds or more), while simultaneously restoring the fish to its historic habitat.

Quinton Phelps, a Missouri fish ecologist, is optimistic about the gator gar’s helping to control Asian carp, though he does recognize that the plan may not provide an easy fix to the problem. “There is potential for them to be a wonderful weapon, but it’s just potential right now,” Phelps told the Los Angeles Times.

Rob Hisalbeck, an Illinois DNR biologist is more skeptical. “I don’t think alligator gar are going to be the silver bullet that is going to control carp, by any stretch of the imagination,” he said.

Likewise, the DNR states: “Nothing can control the [Asian carp] population right now. In the long-term, creating commercial markets for Asian carp will be the best hope of reducing their numbers.”