Plus the story of a state record gar from Oklahoma 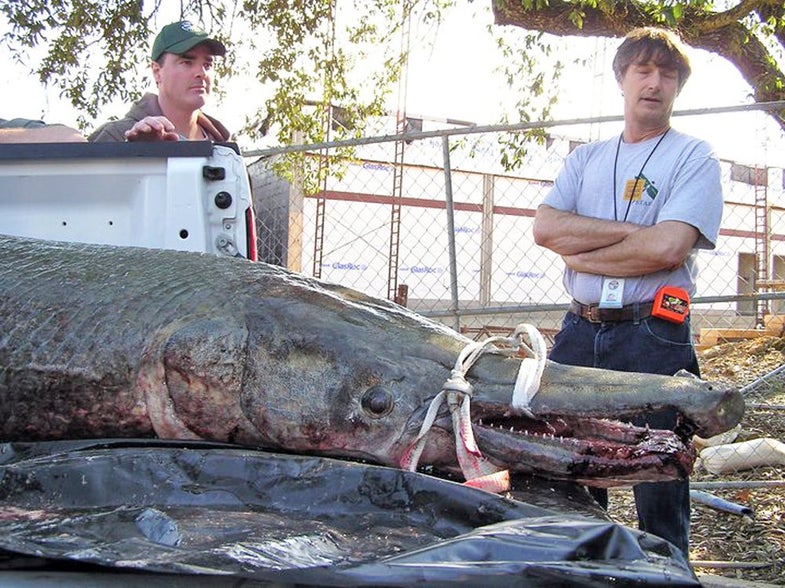 It's believed the fish was a female. Field & Stream Online Editors
SHARE

Editor’s Note: Alligator gar stories often cross our desk, and we generally refrain from publishing them because too often these amazing, prehistoric fish are caught and killed for nothing but a trophy photo. This story is an exception; the record gar in these photos became tangled in a net and was beyond recovery when a fisherman hauled it in.

When Vicksburg, Mississippi, commercial fisherman Kenny Williams began pulling up his last net of the morning from the depths of Lake Chotard February 14, 2011 he was expecting nothing more than to reach his weekly quota of buffalo. But what he brought up in his net that day ended up being the largest alligator gar ever caught. Here’s his story.

Williams plies his trade out of a 16-foot aluminum boat, setting his nets in the many oxbow lakes along the Mississippi River. His usual catch consists of buffalo, which is what he was after on Valentine’s Day morning on Mississippi’s Chotard Lake.

“I was almost finished for the day and had caught about 90 percent of my weekly quota,” says Williams. “It had been a good morning, the boat was full of fish.”

But as Williams began pulling up that last net, which was set in about eight feet of water 75 yards off shore, it seemed to hang up on something. “I honestly felt like I had hung up on a log. It was coming up, but it was dead weight and it didn’t seem to be moving at all. At that point I didn’t think it was a fish.”

When the gar’s monstrous head suddenly broke the water’s surface, Kenny knew he had, literally, a monster by the tail.

“I catch gar on a pretty regular basis, but they’re usually around three or four feet or so, 30 to 50 pounds, just average-size gar.” This gar, however, was far from average. “I saw it and I just couldn’t fathom a fish being that big.”

Williams said the fish was barely alive when he came upon it, and it died soon after.

The problem at the moment was trying to get the massive fish in the boat. “I thought, Lord, don’t let him put up a fight, because he’s going to hurt me. And thankfully, it didn’t really fight that much.”

But there was a problem: Williams weighed 170 pounds. The fish, almost twice that. “I kept trying to hoist him in the boat and he kept slipping back into the net.” This went on for almost a half-hour before Williams finally managed to get both hands under the gar’s gill plates and with the last of his strength, pulled the fish into the boat.

“We landed there in the bottom of the boat together and I was so tired I couldn’t move. I was amazed at how big he was, and I still don’t know how I managed to do that.”

Williams had to figure out how to get back to the boat ramp with a boat so loaded with fish that it had less than four inches of freeboard. “Remember, I already had a boatful of fish before I caught him.” With no way to get the boat on plane, Williams was forced to slowly make his way back to the ramp. “It took me a good long while.” As soon as his boat was unloaded, Williams took the gar to his brother’s house.

“We still didn’t know how big it really was. I really wanted to keep the fish alive and donate it to an aquarium, but it took so long to get back and the fish died on the way. We called the game warden and he said to get it to a local metal yard where we could weigh it on a scale.”

Hoisted in the air, the gar’s length and girth are evident. Biologists later measured the fish at 8 feet, 5 and 1/8 inches long, 47 inches in girth and officially 327 pounds

Another view of the monster gar in relation to Kenny Williams. The fish’s age is estimated to be between 50 and 70 years.

“I was pretty shocked when we put it on the scale. I had no idea it was that heavy.”

Williams decided to donate the prehistoric-looking fish to the Museum of Natural Science in nearby Jackson. “I wanted it to stay in Mississippi, so I decided to give it to them.”

According to biologists, the fish is not only much larger than the all-tackle world record gar (a 279-pound beast caught in Texas in 1951) but it might very well be the largest alligator gar on record, ever.

When the fish arrived at the museum it caused quite a stir. Since it was caught in a net the fish will not be eligible for recognition in the IGFA record books, but Williams doesn’t mind. “It’s an awesome fish, the fish of a lifetime and I’m just glad it’s staying here and people will be able to see it.”

Museum personnel measure the fish prior to unloading it. It’s believed the fish was a female.

The fish after unloading. As big as this fish is, Williams believes there are bigger ones out there.

“Nine years ago I netted one that I think was almost as big as this one. It wrecked my net and got away. They’re out there…”

From this story on the Oklahoma Department of Wildlife Conservation website:

James Tucker of Ardmore pulled in a 192-pound, 1-ounce alligator gar Jan. 27 from the Red River in Love County, establishing a new state record. The record-breaking fish measured seven feet, seven and a half inches long and was an impressive three feet, three inches in girth. Tucker snagged the monstrous fish about 10 a.m. using a 65-pound test line. Tucker’s fish broke the previous alligator gar record by more than six pounds. Sean Chatham, also from Ardmore, held the former record for a 184-pound, 3-ounce fish caught from the Red River in 2006. Alligator gar are truly unique fish and can be found in warm, sluggish rivers in the southeast quarter of the state. Alligator gar feed primarily on fish, but are known to eat ducks and other water birds.

The second largest freshwater fish in North America, the alligator gar is second in size only to the white sturgeon. Reaching weights of up to 300 pounds, the alligator gar can stretch to lengths over nine feet. Historically, the alligator gar’s home range included the Mississippi River and its tributaries from the lower reaches of the Ohio and the Missouri rivers southward to the Gulf of Mexico. Today the range is significantly smaller. The fish are primarily restricted to coastal rivers, with inland populations persisting not only in Oklahoma, but also in Florida, Georgia, Alabama, Tennessee, Arkansas, and Texas.

Anglers once believed that the alligator gar was a significant threat to sport fish species and often were viewed as a nuisance, but today, with better knowledge of the species’ habits and behaviors, the fish is recognized as an important part of Oklahoma’s waters.