A home security camera trained on Jenn Reid’s backyard in Burlington, Ontario, alerted the homeowner to a coyote’s near-fatal attack... 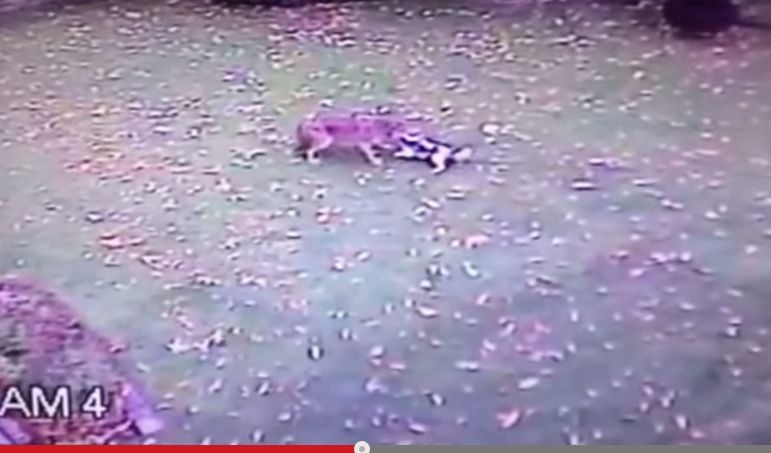 A home security camera trained on Jenn Reid’s backyard in Burlington, Ontario, alerted the homeowner to a coyote’s near-fatal attack on the family cocker spaniel.

Reid was walking by a security monitor in her kitchen and saw a coyote enter her yard where the dog, Holly, was tied up. The predator clamped down on the dog’s neck, shook it, and tried to drag it away. Luckily, the leash didn’t break. The security footage was posted to YouTube on November 6. Some viewers may find it graphic.

“I didn’t have time to think,” Reid told CHCH in Canada. “I ran out the door and I just ran for my dog to try to make it stop. My kids followed me out the door and they were screaming and crying. The dog, as soon as the coyote let go of her, ran back toward my kids and the dog was crying and yelping and covered in blood.” The dog suffered multiple two-inch-deep puncture wounds, but survived with emergency surgery.

There have been at least two other attacks on dogs in the neighborhood—one of them fatal—and there are fears that a child could be the next victim. The woman whose dog was killed said that her children saw another coyote while they were waiting for the school bus and were forced to get inside a stranger’s car for protection. A representative from Burlington Animal Services reminded residents not to leave food outside and to report coyote sightings online.