In a special Friday poll, we’re pitting a taloned, airborne knife thief against the Swiss trout with a built-in line... 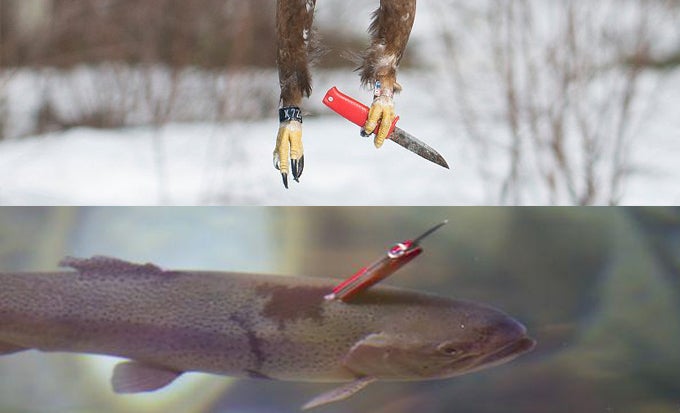 In a special Friday poll, we’re pitting a taloned, airborne knife thief against the Swiss trout with a built-in line cutter embedded in its head. Who wins this wildlife grudge match?

Outdoorhub reports that Dutch photographer Han Bouwmeester captured this photo of a golden eagle in Västerbotten, Sweden, last year. He’d been cutting up meat to attract birds of prey to photograph, when the eagle swooped down, grabbed his knife, and flew away. The eagle gets points for stealth and exacting just punishment.

Joe Cermele introduced us to Swiss Army Trout, a rainbow trout that was photographed—reportedly, and ironically—in Switzerland. Though Elite Daily wrote that the fish could be “part android killing machine,” Cermele guessed that someone dropped the iconic red multi-tool while attempting to use it, and the ‘bow was in the wrong place at the same time. Still, it seems unbothered by its new headgear—its poker face might be enough to ruffle the opponent’s feathers.