On Monday, Pope & Young announced that a Shiras moose killed by Colorado hunter Bobby Hebert in October may top... 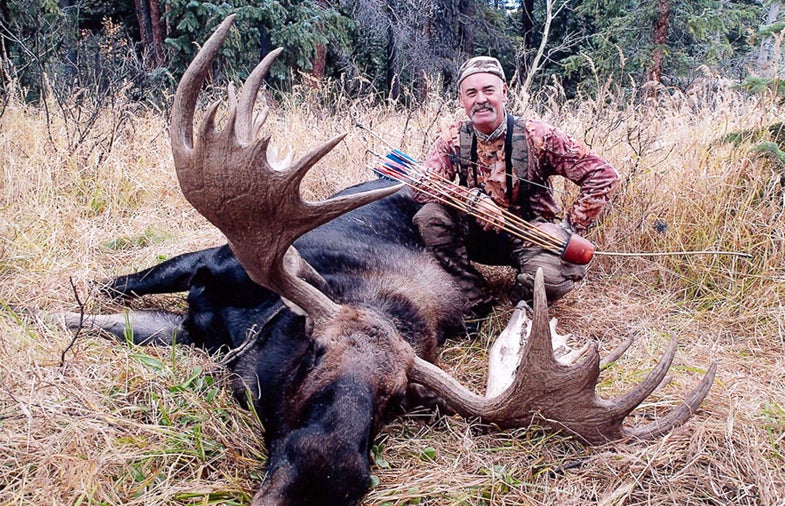 On Monday, Pope & Young announced that a Shiras moose killed by Colorado hunter Bobby Hebert in October may top the current archery world record, set in 1987 by Richard E. Jones of Wyoming. According to a press release, Hebert’s moose had an initial entry score “8 2/8 inches higher” than the current record of 185 6/8 inches.

In the release, Herbert tells his story:

We were making our way around to where I had been calling the night before, when my hunting partner, Mike, told me to stop. He thought he could see a moose in the trees ahead. I slowly raised my binoculars to find it was the bull we had named Yukon Jack. Mike told me to stand behind some pine trees and he proceeded to walk away. The moose seemed to watch [Mike] disappear into the trees beyond me and started toward my direction. The massive bull grunted with every step as he walked by me at 9 yards. I took a single step and let loose with my arrow, watching it strike home. He ran off about 40 yards and fell over. When I returned with Mike…, the bull was standing up. I maneuvered around him for another shot, but he disappeared into some trees. We found him lying down with his head behind a pine about 20 yards away. I nocked another arrow, let it fly, and it hit true. He ran another 35 yards and collapsed. I literally shed tears of reverence and joy, giving thanks to the man upstairs. I am incredibly grateful to have taken part in this once-in-a-lifetime hunt.

An official Pope & Young judging panel will need to confirm Herbert’s moose before it can claim the world record, but, given its size, even with slight mismeasurements and shrinkage, it will easily best the standing record, in all likelihood.

In a statement, Ed Fanchin, Pope & Young’s records chairman, says, “The size of the moose is a testament to sound conservation work and game management. It’s great to know that animals of this class are currently roaming the woods. What I like most is the story behind Bobby’s hunt, and how it was a true example of fair-chase, ethical bowhunting.”

In January, Rocky Mountain Specialty Gear—a Colorado archery supplier run by Herbert’s brother-in-law Tom Clum—posted to Facebook the below picture of the moose’s rack. The caption states that Herbert killed the animal with a Rampart longbow at 12 yards. Herbert liked the photo and, in the comments, thanked those who congratulated him on the trophy.