Photograph via BZ Outdoors/YouTube In late November, a trail camera caught sight of a cougar in Humphreys County, Tennessee, 70... 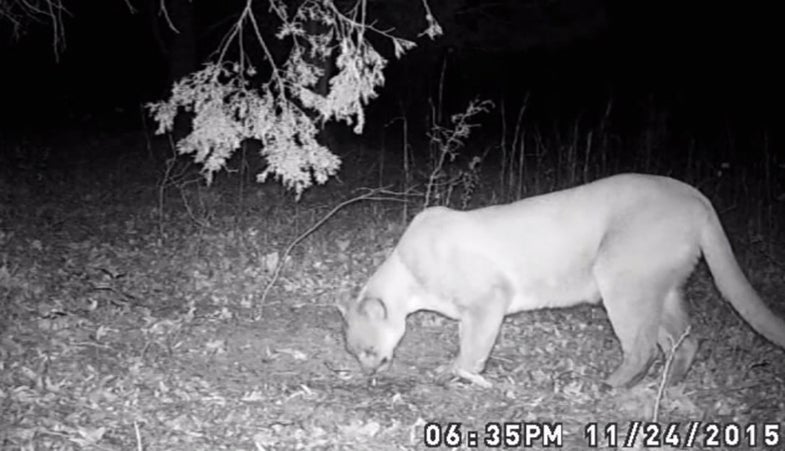 In late November, a trail camera caught sight of a cougar in Humphreys County, Tennessee, 70 miles west of Nashville, News Channel 5 reports. There have been other big-cat sightings in West and Middle Tennessee this year that the Tennessee Wildlife Resources Agency has verified, as well. TWRA spokesman Don King says that a cougar “[had] not been confirmed by state authorities in Tennessee in perhaps 100 years” until these recent reports. Speculation about Tennessee mountain lions has been a source of myth and lore in the region for about as long.

Historically, locals referred to the cats as “panthers,” and their existence in the past is well known. In June of 2015, however, the U.S. Fish and Wildlife Service finally deemed the Eastern cougar extinct, with the exception of the Florida panther, which still roams some parts of southern Florida. According to researchers, the last indigenous Tennessee cougar was killed in 1930, and biologists assert that the cats responsible for the recent spottings have migrated from the West, through the Midwest, and now into the Southeast.

This makes sense considering that a separate sighting occurred in Obion County, Tennessee, in October, two months prior to the Humphreys County sighting. Obion County rests in the northwestern part of the state, near Missouri, and the photos taken in Humphreys County suggest that the cougars are continuing to roam southeasterly. According to biologists and the TWRA, these sightings do not confirm that Tennessee holds a breeding population of the species, and that Western cougars have already been spotted in Missouri, Arkansas, Kentucky, Illinois, and even Connecticut.

“There’s a lot of habitat for them in Tennessee,” TWRA spokesman Doug Markham tells WSMV. “There’s a lot of things for them to eat, like deer and the smaller wildlife, that’s out there.” Markham speculates that the cougars will continue expanding their range throughout the region. As it stands, hunting the cats remains illegal, but their populations may become large enough to eventually support a season. Native or migrant, hunter or hunted, a top predator has returned to one if its old haunts.