The other night, I caught an episode of “Diners, Drive-ins, and Dives” on the Food Network that very much intrigued... 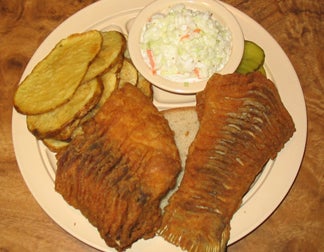 The other night, I caught an episode of “Diners, Drive-ins, and Dives” on the Food Network that very much intrigued me. Guy Fieri, the host, pays a visit to Joe Tess Place in Omaha, Nebraska. This joint started out as a local tavern back in the 1930s, but gained serious notoriety for their fish sandwiches that were made from carp.

To this day, most of Joe Tess’s customers flood in for their “famous fish” platter (that’s how it reads on their menu), which is served on a slice of rye bread with coleslaw and fries. You can order fish ribs or tails, and the live carp are pulled from a tank somewhere in the back. I’ve been trying to find a show clip, but it seems one doesn’t exist.

Perhaps I’m not well schooled in popular food fish from around the country, but this was the first time I ever heard of a restaurant serving carp, let alone having the carp be the main attraction. The folks interviewed during the show were totally digging it. Many were regulars. But when Guy Fieri tasted a piece in the kitchen, his usual over-the-top reaction was nowhere to be found. “That’s a good piece of fish” was basically all he said. So what say you? Have you eaten deep-fried carp? Would you? Perhaps I’m missing out on something here.