I probably own about half a dozen Coleman lanterns – a couple of propane and duel-fuel lights, but mostly those... 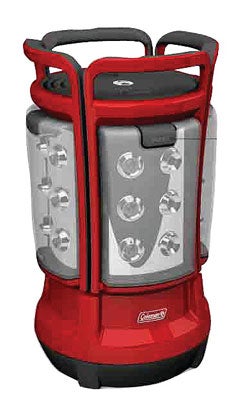 I probably own about half a dozen Coleman lanterns – a couple of propane and duel-fuel lights, but mostly those that run on Coleman fuel. My favorite is a lantern that my father used to have back in the 1950s. It’s in mint condition and it still works perfectly (though I had to replace the generator and O rings a couple of years ago).

When I first saw the LED Quad, my first reaction was, why isn’t it green? That can’t be a Coleman lantern! Well, it’s red, it’s a Coleman, and it’s a totally new twist on camp lights.

The deal with this is that it’s got a base that holds eight D-cell batteries. Turn it on and it’s bright enough to light up the night – for 75 hours, according to the company. The cool thing is that the Quad has four lighting panels that can removed and used separately. Each has six 5mm white LEDS, for a total of 24 in the whole unit. A rechargeable NiMH battery runs each panel for half an hour it while it’s away from the mothership. Place it back in its docking station and it’ll recharge from the D batteries.

I’m not giving up my old Colemans, but I can see where this lantern is going to fit right into the mix. It’s bright, it’s quiet (doesn’t hiss like the gas models), and it’s versatile. The $69.99 msrp is a bit higher than most gas lanterns, but the price doesn’t seem unreasonable. It’s available from www.coleman.com – Jay Cassell