Trout: How Much Does Tippet Size Really Matter?

How much does tippet size really factor into whether or not a trout eats your fly? I’m going to say... 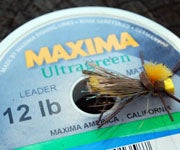 How much does tippet size really factor into whether or not a trout eats your fly?

I’m going to say somewhere between 5 and 15 percent, in terms of the total “presentation” equation. And I think that’s being generous. But I’ll also add that all of that depends on three things: the size of the bugs (naturals) the trout are actually eating, the speed of the current, and the clarity of the water.

My late, great friend and mentor, Charlie Meyers, is the one who initially changed my mind on all of this. I used to be the guy who would see a trout refuse my fly and would size down to 7X even before I switched the fly pattern. Charlie said to me, “Deeter, you could tie a kite string to that bug, and if you know how to float it right, it will get bit.” These days, I don’t carry anything smaller than 5X, and 90 percent of the time, I fish with 4X or 3X. And when I’m really having fun with streamers, I use Maxima.

So I decided to revisit old Charlie’s theory the other day. I tied 12-pound Maxima to dry flies and fished with 5X on the same flies. I switched back and forth all day. The current was swift. It’s grasshopper season (at last!), but the water was gin clear on the stretch of the South Platte River in Colorado where I performed this little test.

The best presentation of all was a drag-free drift made with a downstream (about 45-degree) cast, tight to the bank. Fish ate that one almost every time. (So think about where you cast from, in terms of shadows, distance, and so forth before you make a long hero cast that won’t be worth anything.) The straight-upstream shot was less effective for both the Maxima and 5X. Any drag on the fly with either spelled “game over,” and I will admit that it was a bit easier to lift and mend the line and leader with 5X on the shots that were exactly parallel to the current than it was to do the same with Maxima.

But I am thoroughly convinced that tippet size is a nominal factor if you can put a fly in the right zone and let it ride drag-free for three seconds, especially in the context of fishing big dry fly patterns like hoppers.

Now, would I tie Maxima to a size #20 Barr emerger when I’m targeting sipping trout on a spring creek? Heck no. But I’d sooner do that than run 7X through a riffle where fish are eagerly chopping away at Green Drakes on the surface. Especially if I thought I had a chance of hooking anything larger than a foot long.

In the end, this exercise proved to me that it’s all about the fly and the drift. You will hook more fish than you will miss if you can pick the right one and float it in a natural way (even for a few seconds) in a place where you suspect the fish might be. Period. End of story. And all that “size down to ultra-thin tippet” mumbo-jumbo is, in most cases, more effective in getting anglers to buy spools of monofilament than it is at actually helping them catch fish. Perfect the drift and you will win most of the time.

That’s my two cents, intended to save you money. But if you still have doubts, go out there and sling some hoppers on Maxima for yourself, and you’ll become a believer also.