Photo by Tim Daughton (Linehan left, Deeter right) I got to do something I have wanted to do for a... 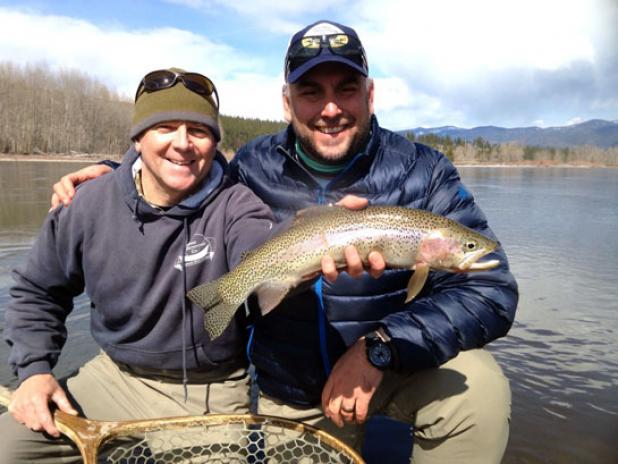 I got to do something I have wanted to do for a very, very long time last week. I floated and fished with Tim Linehan. He rowed 16 miles of the Clark Fork in western Montana, and I casted along with Tim Daughton, product development specialist for the Orvis Company (this coincided with the 2014 Orvis Guide Rendezvous). The trout fishing was fair to good, but the day ended up being one of the most memorable and rewarding times I have ever spent in a drift boat.

Linehan is a humble guy, but he’s universally respected in the guide world. He and his wife Joanne own Linehan Outfitting Company and Kootenai River Guides in the far northwestern reaches of Montana. They’ve been in business for over 20 years, running both fishing and hunting operations. He was named the 2013 Orvis Guide of the Year, and he’s been Montana Guide of the Year as well. He’s one of those talents that other guides would gladly pay to take them fishing.

Over the years, I have been very fortunate to ride along with the best in the business — people like Terry Gunn, Joe Demalderis, Patty Reilly, Pat Dorsey, and the late Denny Breer. Many of them had nice things to say about Linehan, so I’d always wanted to fish with him, just like a musician who wants to “sit in” and play with someone they respect for being at the top of the craft.

Those of you who follow Fly Talk know that I think that being a great guide involves a lot more than rowing a boat and tying on flies. It runs a heck of a lot deeper than, “Nice fish, pretty colors.” I found a few things to be particularly interesting about Linehan.

First of all, the guy is incredibly energized about the fishing (manic might be too strong a word, but it did pop into my head a few times on the river that day). He’s motivated to catch fish and get the most out of (and for) his anglers. But not in a demanding way. His energy is incredible. He’ll pop from bank to bank, huffing and puffing on the oars to set up the shots, back and forth, smiling and encouraging all along. You cannot fake or manufacture that kind of enthusiasm. And given how many river miles that guy has rowed, I’m amazed by how brightly his fishing pilot light burns.

He’s positive. I don’t think I felt a tick of “down time” during the whole day, even when I was untangling some of the messes I created in the back of the boat.

He has an uncanny knack for knowing where the fish are. This guy is on another level when it comes to being in tune with the water. Granted, that’s born of spending a lot of time behind the sticks, but I cannot tell you how many times he pinpointed a casting spot to a square yard or less, and when we dropped the flies in the bucket, it was almost automatic.

He has an incredibly strong conservation ethic. Linehan gets the fact that without resources, there is no fishing. And people have to be proactive about protecting fishing resources. It doesn’t just happen.

He’s a great teacher. I think the mark of good guides is the amount of wisdom they can share, not how many fish they help you catch. If I leave the boat at the end of the day having learned one thing new, I’ll call that a great day — even if I got skunked. In this case, I learned several completely new tricks in one day, which is saying something because I write about fly fishing for a living.

The best perspective Linehan had to offer was something he said when he delivered the keynote speech at the Guide Rendezvous dinner a few days later. Paraphrasing Hunter S. Thompson, he said that guides are really in the “transportation business.” Not so much to row people from point A to point B, rather, to transport people emotionally, spiritually, and in terms of their knowledge and appreciation of nature and fly fishing, from one place to another. I couldn’t agree more. And if ever you get the chance to visit Montana and fish with Tim Linehan, I suggest you take that ride. It will change how you feel and think about this sport.