Do You Palm Your Reel?

In recent years, drag technologies in fly reels have gotten so good that they tend to take the necessity of... 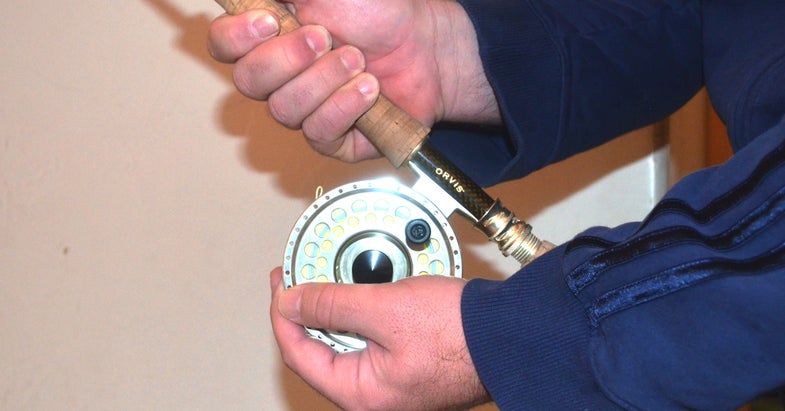 In recent years, drag technologies in fly reels have gotten so good that they tend to take the necessity of “palming” (using your hand or fingers to slow the reel rim as the fish pulls line) out of the game. But as I have gravitated back to more “retro” click-and-pawl reels, I find myself revisiting that move more and more. After all, it’s how many of us started playing fish, and as you get it dialed, it actually helps you sense a fish’s moves, get a better feel for when they tire and are ready to be landed, and so forth. Beyond that, palming is fun, and it helps you feel more “connected” to the fish you’re battling.

In my mind, there’s really no right or wrong way to palm. The one thing I’ll say is that it’s important to cradle the reel from the bottom, rather than the side. But you probably don’t need me to tell you that: Get your knuckles knocked by a screaming reel once or twice, and you’ll smell what I’m cooking.

I also subscribe to a less-is-more approach to palming, in that I usually won’t go right for the palm until after a fish has made a run on its own, and after that, I err on the side of a light touch, rather than clamping down with a grip.

Of course, you can’t palm every reel, since some models have the spool fully contained within the rim. I tend to shy away from those, though, because I like to have the option of palming.

Give it a try the next time you’re out (unless you plan on pulling on a 100-pound tarpon). Even if you use a performance disc-drag reel, let it off a bit, not quite to free-spool, and start playing around with palming. After all, not everything you hook will be the exact same size or have the same energy. Also, water currents differ from spot to spot, so it’s hard to dial in on an exact, do-all drag setting for every fish and every place. On top of that, in my guiding experience, a lot of anglers break off fish when they’re fumbling around to adjust the drag setting. Better to set it fairly light, and be able to use your palm to slow the reel down (at least for trout) than to have the drag too firm, and hope you can back it off before you break. Palming the reel, even every now and then, will improve your fish-fighting senses immensely. That said, don’t go overboard. If a performance drag will help you land a great fish, by all means, you should get what you paid for.