Unless you’ve been living in a cave I must assume you’ve seen the book, Fifty Places to Fly Fish Before... 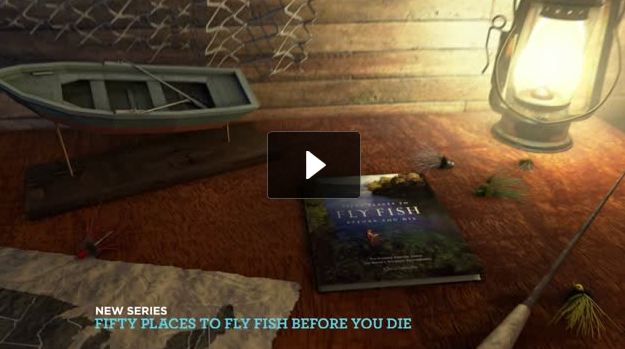 Unless you’ve been living in a cave I must assume you’ve seen the book, Fifty Places to Fly Fish Before You Die. It was written by friend and sometimes writer for my magazine, Chris Santella. Chris’s bio is longer than my arm with regular stints at the New York Times, Forbes.com, and many many fly fishing publications. He’s a fantastic writer and an even better person. The book has been around for a number of years and the premise is just as it sounds. Chris picks the brain’s “of the sport’s acknowledged gurus, and goes beyond standard guides to convey the very essence of the recommended locations. Readers can vicariously cast mouse pattners to fifty-pound taimen in the wilds of Mongolia, wrangle with wily permit off the Florida Keys, and match the hatch on Montana’s Armstrong’s Spring Creek. The essays include a cultural and natural history of each site, along with colorful anecdotes based on the author’s and authorities’ experiences.” Now starting January 11th on the World Fishing Network the book will be coming to TV and hosted by none other than Conway Bowman, another friend of Kirk and mine.

Full disclosure… Kirk and I were both interviewed for the follow up book, Fifty More Places to Fly Fish Before You Die so I’m a bit biased, but knowing what Chris and Conway can accomplish I have a feeling the new show will be very entertaining and as Chris said to me, “will hopefully elevate the general quality of outdoor programming by detailing both personalities and conservation issues pertaining to each fishery.” So if you’re in need of a fishing fix with a different take on the boob tube and are sick of all the garbage on the air now, do yourself a favor and check out Fifty Places to Fly Fish Before you Die on the when it starts on the World Fishing Network next week.