How Can this Simple Little Fly Catch So Many Trout?

Most of the Colorado guides I know reserve a few rows of their favorite dry-fly boxes for a simple little... 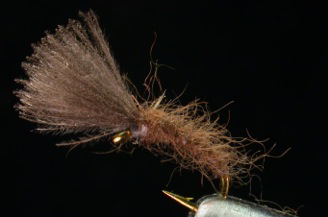 Most of the Colorado guides I know reserve a few rows of their favorite dry-fly boxes for a simple little Charlie Craven pattern called the “Mole” fly.

It is, in my opinion, the most deadly effective dry fly pattern for when trout are highly selective and keyed on small mayflies, particularly baetis. I’m usually a fan of the size 18 parachute Adams, as I believe that, presented right, that bug will tackle 90 percent of dry fly challenges. But when I have encountered that other 10 percent, it’s the Mole fly that saves the day. I’ve seen it many times: show the fish 10 different dry flies, and finally solve the riddle with the Mole. I should probably lead with the Mole. But it’s fun to watch its effectiveness with some context.

The pattern is a testament to how sometimes simpler is better. This fly doesn’t take many steps to tie. It’s just thread, beaver fur dubbing and a CDC wing. Craven is brilliant for keeping patterns streamlined and simple. Sometimes that little extra flash, or that extra wrap of color does 10 times more for the angler’s eyes than it does for the fish. Overkill can put trout off. I think about 75 percent of dry flies and nymphs sold through fly shops these days are probably over-engineered.

One last point: Never underestimate the power of CDC. Cul-de-canard. The end of the duck (the feathers literally come from the duck’s backside). Naturally buoyant, CDC makes the most realistic wings, especially on dry flies. But CDC gets gunked up and is hard to float after a fish or two has bit the fly. The key to fixing that is using a scant dab of Tiemco Dry Magic before the first cast, rubbing off excess with a Wonder Cloth or felt rag. The better you treat the CDC with gel (but be sure the feathers aren’t matted), the longer the ride lasts.