Is There an Advantage to Stinger Hooks?

A great question posted in the Fly Talk thread from jcmesq: “Are ‘stinger’-like trailer hook placements integral to salmon/steelhead streamers/flies?... 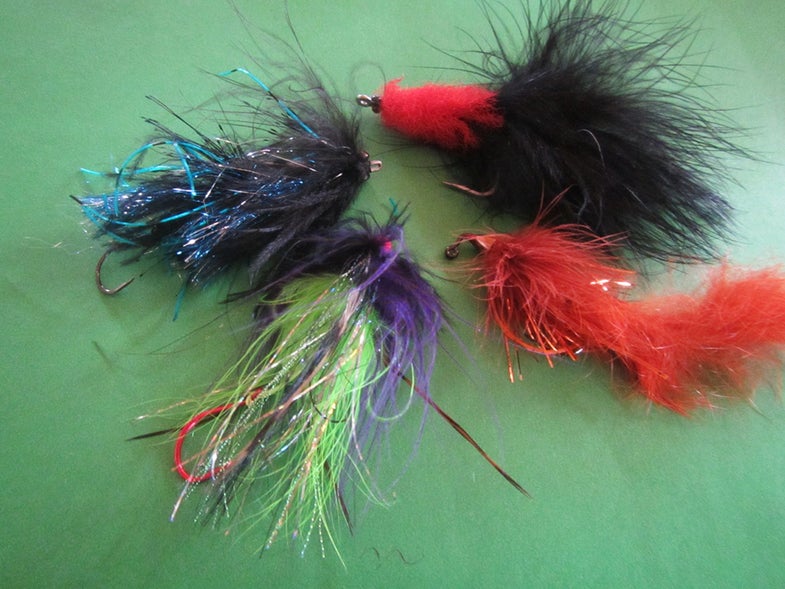 A great question posted in the Fly Talk thread from jcmesq:

“Are ‘stinger’-like trailer hook placements integral to salmon/steelhead streamers/flies? Is there an advantage to placing hooks this way, to catch these species? I just bought some of these types of flies from a good fly shop yesterday, and I didn’t notice this feature until I got home and I placed my new toys in their appropriate box. Your knowledge would be appreciated.”

I actually have a good answer–or at least a qualified hunch–for this one, having spent a lot of time in scuba gear watching fish feed under water, specifically trout, steelhead, tarpon, and largemouth bass.

Before I get into that, I should explain the “stinger” for those who do not know. Whereas most streamer-type flies are tied on the hook itself and the tail section trails off the hook shank, with a stinger, the body of the fly is tied on a tube or a post of some sort, and the hook is tied to a section of heavy line or cord (dacron or gelspun backing), so that it ultimately ends up at the very tail end of the fly. The flies pictured here at left have stingers, and the tarpon fly (top right) and bass fly (bottom right, yes that’s a Meat Whistle often used effectively for trout, but John Barr designed it to catch bass) do not have stingers. The stinger has been around for a while now, and is becoming more and more the standard in steelhead and Pacific salmon flies, as jcmesq points out.

Well, it all comes down to what fish are eating (or biting) and how they go about doing that. If you watch a bass or a tarpon eat, for example, you’ll see them flare their gills and suck an unsuspecting baitfish into their mouths. Thus a stinger does no good, and in fact can complicate matters if you intend to release the fish. A golden dorado in South America will attack baitfish head-first, thus, if the lead eyes of your fly fall off (which happens), you should switch flies. No eyes, no strikes.

A feeding trout is going to let food drift in the current and then suck it in. If they don’t like it, they spit it right back out. But, it’s a current-driven intake. You’ve probably seen trout “sip” flies off the surface, leaving dimples behind, which is caused by them sucking in the bugs and water.

Steelhead and certainly salmon are often not “eating” at all. But you can get them to bite. The strike you are looking for is a reaction strike. And when you swing flies, your bug is going to sweep across the current, usually a foot or so under the surface (more if they’re weighted, and you’re fishing sinking tips); the fish is going to see it, chase it, and grab it from behind. The fish is going to make a move on the fly itself, and the first part of the fly they encounter (often the only part of the fly, if they “short strike”) is the tail. And thus, that is where the hook should be, if you want to make the first (only) bite count. Especially if that bite is more of a “snap” than a full-on inhaling of the fly.

Whenever you know the strike is going to come from the tail end of the fly, the stinger is an advantage. Barracuda fishing, when the fish trail and eat the fly from behind, usually involves stinger flies. Salmon and steelhead flies for swinging are more effective with stingers, in my opinion.

Anything you are going to dead drift, or you don’t know from which angle the attack will necessarily come, the stinger isn’t much of an advantage, and can be a hindrance.

So the natural follow-up question is, would you fish stinger-streamers for regular trout? My answer is yes, in a river, if I’m in a boat, and trying to get a reaction strike by casting downstream at an angle, banging the banks. No if I’m fishing a lake or pond.

I hope that answers it.