It’s the “magic month” when grasshopper fishing is at a peak in most regions. There’s nothing quite like watching that... 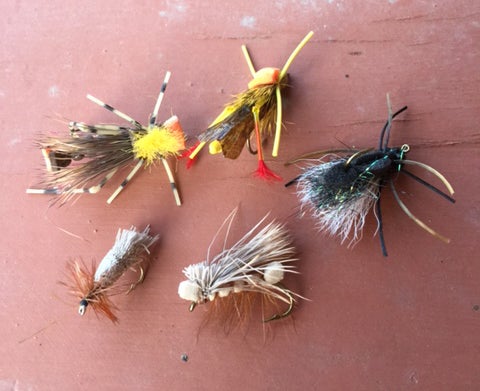 It’s the “magic month” when grasshopper fishing is at a peak in most regions. There’s nothing quite like watching that slow, deliberate rise when a big brown trout tracks and eventually snarfs down a juicy “T-Bone.” I’ve always loved dry-fly fishing with grasshopper patterns more than any other type of dry fly fishing.

But my preferences in specific grasshopper patterns has evolved over the years. When I first started out, I was partial to Josephine Sedlecky-Borsum’s hopper patterns from Ed’s Sport Shop in Baldwin, Michigan. They’re still among my favorites, but I can’t tie them as well as Jo did. They don’t really look much like a true grasshopper at all, and they don’t float that well in lumpy water, but most trout will not let this bug drift by them if it’s presented right.

I also like Whit’s Hopper and Dave’s Hopper. Dave Whitlock is a genius. I found that the more a Whit’s hopper got bit on a Montana river, and the rattier it got, the better it worked. I would trade my friends new flies for their beat up old ones.

I do indeed believe that hints of red, on the tail or tips of the legs of some grasshopper fly patterns enhance their effectiveness. I have no idea why.

Of course, many grasshopper flies aren’t complete these days without rubber legs. We can thank the Turck’s Tarantula, and the Madame X for that. I think Jack Dennis’ Amy’s Ant is probably the most versatile, go-anywhere hopper pattern ever made.

Foam, of course, changed everything. One has to love the Barr/Craven Hopper, especially as the top fly in a dry-dropper rig. And the Chernobyl Ant is the bomb, though I think the pink ones are overrated, except in the Driftless Area of Wisconsin. I would not fish there during this time of year without them.

Eventually, it seemed like the grasshopper fly design contest turned into a race to make the ugliest, gaudiest bugs that float. Thing is, I have found that trout don’t always like those extravagant concoctions. In fact, some of the most realistic looking representations of grasshoppers are the least effective flies, in my experience.

I’m gradually becoming more and more of a believer in the “less is more” theory. Many times when I’m hopper fishing these days, I’ll use a simple XL, tan, foam elk hair caddis, like those tied by Stu Tripney. I might trim the hair wing back a little bit, but it’s the plain foam tan body with some palmered hackle that the fish like, and that’s all I need.

Another caddis fly that doubles well in hopper season is the Goddard Caddis, size #10.

And when I fish a Chernobyl Ant, it’s usually a size #10 or #12, simple black, with rubber legs (clipped back a bit) and a tiny fleck of orange on the back so I can spot it. That’s a good bug for partly cloudy days.

The one thing I would say is that if your hopper fly pattern clearly gains the attention of a trout, but gets refused, switch it right then. Don’t make a second cast with a refused hopper. And wait between casts. Eventually you’ll land on something they can’t refuse, and more often than not, what they really want is a good drift.