Like my good friend Joe Cermele, I was thrilled to see that Pure Fishing had brought back the classic Pflueger... 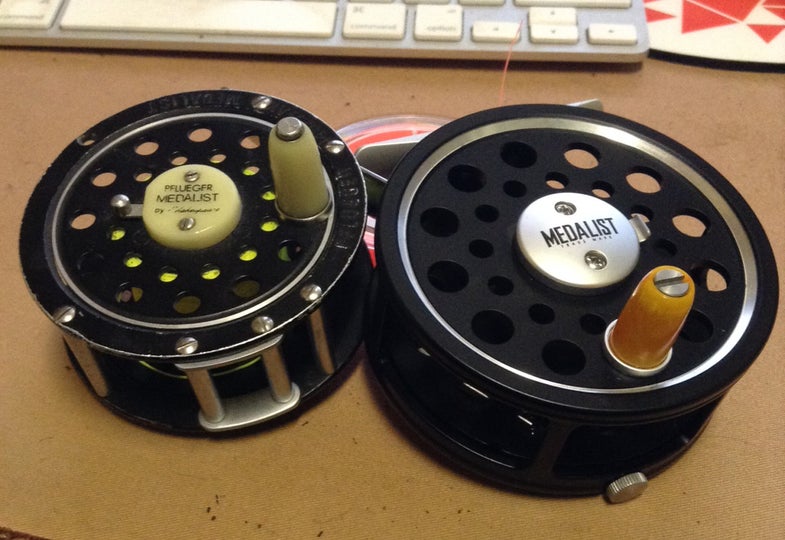 Like my good friend Joe Cermele, I was thrilled to see that Pure Fishing had brought back the classic Pflueger Medalist reel, which will be hitting store shelves in the near future.

Like Joe, my first fly outfit featured a Pflueger Medalist. I still remember Grandpa saying, “That’s really all the trout reel you will ever need.” And he was right, because over the past 30-some-odd years, trust me, I’ve bought and fished many reels, and seen many (often much more expensive) models bite the dust. But I still have–and still fish–the original Pflueger (1495 1/2 AK) I got as a teenager.

The only hitch is, the new Pflueger isn’t really the same reel as my old one.

That’s not necessarily bad. As Joe pointed out, the older models (first introduced in 1931) were cast aluminum, and the newer models are made of tougher bar stock aluminum. And, let’s face it, when you’re talking about click & pawl reels (which all Pfluegers are) “drag technology” isn’t really a performance feature. It’s really all about simplicity, aesthetics, and price. The new Pfluegers have those things covered; a reel for your 5-weight will cost $129.95. I have fished one recently, and it is perfectly fine.

But there are a couple features I miss. The New Pflueger Medalist spool sits flush against the frame, while my old spool rests fully inside the frame. My old one has metal spacer bars, and a special double spacer through which I feed the fly line into the rod. The new Pflueger’s bars are built into the frame. Again, that’s not necessarily bad (I had one of my old bars fall out and have yet to replace it) but it does dramatically change the aesthetics, and there is no advantage with the flush spool in terms of being able to palm the reel to create your own drag.

And this might sound hokey, but the new ones just don’t sound the same either. Not on the wind, nor as line peels off the reel. You’d be surprised how much some anglers value the sound effects created by click & pawls. In fact, I know that some reel manufacturers spend a lot of time and energy trying to get those reels “pitch perfect.” The new ones aren’t bad, just different. And of course, the older models were American made, whereas the new ones are manufactured in China.

Don’t get me wrong. This isn’t a New Coke/Old Coke deal, and I think the new Pflueger Medalist will rightly play a major role in the “retro reel revolution” as people realize you don’t need to spend $500 for a reel that will serve you for many years of trout fishing. I hope they sell a lot of them, because more people fishing with Pflueger Medalists now will no doubt lead to legions of dedicated anglers down the road.

But let’s be honest here. This is a “what’s in a name” situation, and what the name represents now is an imported, low-price-point reel, of which there are many equal competitors on the market today. Without the old flourishes and accents, it just ain’t the same. And if you want the original, you’re going to have to go digging in the secondhand market. The new version may very well be a more durable option than the old one is. But, it isn’t the same.