To Be Clear: A Longer Leader Catches More Trout 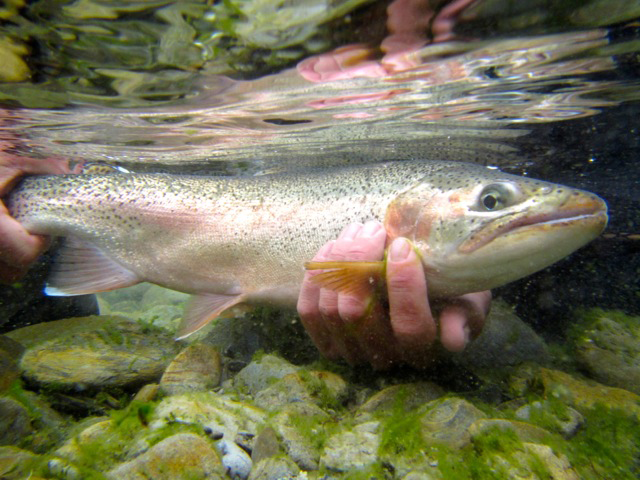 Let me explain that a little more, because it is the best tip I’ve picked up while in New Zealand. In clear water, where you are sight fishing at defined targets, being able to cast and turn over a 15-foot leader with a 30- to 40-foot cast is far more valuable than being able to throw a fly line 60 or 70 feet to begin with, if you’re going to have a 9-foot leader tied to the end of your line. And a longer 4X leader is far, far more effective than a shorter, lighter one. The longer your leader, the heavier material you can use.

Like most American anglers, I have always attached the standard 9-foot (sometimes 7.5-foot) leader straight from the package to my fly line, added a foot or two of tippet material, and set off on my merry way. And that’s always worked. But it’s amazing what adding just a few more feet of tippet, so that you’re ultimately casting 15 feet or more of clear material, can do for your hookup ratio. It eliminates fish being spooked by the solid fly line (of any color) directly overhead. It gives you a longer drift through the zone, and it eliminates much of the drag as you present the fly—all really important keys to getting a spooky, selective trout to nab a dry fly off the surface.

But alas, that long leader can be tricky to cast. It’s hard to get it to straighten out, especially when there’s even a puff of a headwind to contend with. Fight through that. Learn to throw longer leaders. Here are three tips how to make that happen.

1. Build the right leader. It’s okay to have a heavy butt section, in fact, you need that to turn the leader over. Some people use a short (6-inch) strand of Amnesia line to connect the fly line to the leader. I usually just start out with a 2X or 3X leader, and taper down from there. Try not to jump numbers, meaning, tie 2X to 3X to 4X, not 2X straight to 4X. Make sure your knots are well away from the fly, and tie good ones. (I use Blood Knots or Double Surgeon knots). Test them before you cast.

2. In a headwind, to turn the leader over, you need to adjust your stroke to go a tad smoother on the backcast (still with authority) and harder on the forward punch. Drive the flies toward the surface, but don’t crash them down. You want everything to extend about a foot above the target zone, and fall down to the water from there. Drop your casting plane so the flies don’t flutter in the wind.

3. Shock the tippet at the end if you have to, by making an extra-abrupt stop of the rod when you finish the cast. Sometimes you might even give the fly line a gentle 2-inch tug—a “mini-haul” if you will—just to turn that leader over. You’ll feel it as you get the timing down. And the best way to do it right is a straight up-and-down cast. Toss the sidearm stuff out the window.

You might not always need the 15-foot leader, but trust me, learning how to cast and turn one over will never hurt you. Spend more time practicing that little move in the backyard than you spend trying to hoof out an extra 10 yards of line, and I promise you, you will hook more trout, wherever you fish, especially in clear water.