In 1959, Jack O’Connor bought a Winchester Model 70 .270 Featherweight in a hardware store in Lewiston, Idaho. He had... 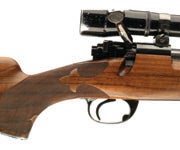 In 1959, Jack O’Connor bought a Winchester Model 70 .270 Featherweight in a hardware store in Lewiston, Idaho. He had bought his first Winchester .270, a Model 54, in 1925, and in the ensuing years had made the cartridge synonymous with his name. He already had several .270s, but as we all understand, one or two of anything is never enough.

The new gun–O’Connor called this the No. 2 rifle–turned out to be very accurate (MOA or just under, which in 1959 was sensational), and so O’Connor took it to his favorite custom gunsmith, Al Biesen, of Spokane, to give it a level of elegance befitting its performance. Biesen completed the work in 1960. Biesen was not only a first-rate craftsman, but had a very good feel for ergonomics. All his stocks had a very slim pistol grip that belled toward the bottom, and they have a very distinctive feel. You can mount a Biesen rifle blindfolded and pick it out of a bunch of rifles.

The wood is quite dense, flawlessly inletted, and rather plain. Biesen left the barrel intact (He turned down the standard-weight Model 70 barrels on which he worked.), tuned the trigger, replaced the loathsome aluminum floorplate with a steel one and converted the floorplate release to a straddle type. Checkering was 26 lpi, in his distinctive fleur-de-lis pattern, and the stock has an embossed grip cap and buttplate. For a scope, Biesen used a 4X Leupold Mountaineer mounted very low and very far forward in a Tilden mount.

Two things strike you about No. 2. First, it weighs 8 pounds even, which was considered state-of-the-art light in 1960, but now feels quite heavy. If the same rifle were built today, it would probably weigh 7 pounds or less. The other thing is, No. 2 has seen a ton of use. The bluing is worn off the muzzle and completely off the floorplate and the stock is covered with small nicks and dings. O’Connor took this rifle on two African safaris and who knows how many North American hunts, and it had seen nearly two decades of hard use when he passed away in 1978.

No. 2 was present at the SHOT Show courtesy of Jack’s son Brad (a charming gentleman who was probably the only person at SHOT who is older and deafer than myself) and can normally be viewed at the Jack O’Connor Center in Lewiston, where the rifle resides. Brad told me that No. 2 is still very much in use; he shoots it and lets other people shoot it. He says that’s what it was made for, and he’s absolutely right.

It was at SHOT to celebrate the 75th anniversary of the Model 70, and to commemorate that landmark and celebrate the memory of the gun’s owner, Winchester is offering two Jack O’Connor commemorative Model 70s, both stocked in very fancy walnut, carved in the lines of the Biesen original, with his checkering pattern. (For details, visit the Winchester website.)

When Gun Nuts TV rolls around for its third season, you will get to see me holding No. 2 and talking about it. Considering that I was weaned on O’Connor’s writing, that was a great honor. A friend of mine claims that there is nothing deader than a dead gun writer, but in the case of Mr. O’Connor, not so.