The Elegant Firearms of Tiffany & Co.

When I visited Smith & Wesson a couple of years ago, I saw the in-house museum on my tour. Among... 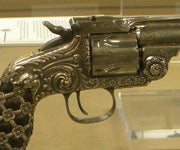 When I visited Smith & Wesson a couple of years ago, I saw the in-house museum on my tour. Among the guns on display was a beautifully decorated revolver with an elaborate art nouveau-style silver grip, the result of a collaboration between S&W and jeweler Tiffany & Co. — it was made for the 1893 Columbian exhibition in Chicago. This revolver and others like it marked a departure for S&W, which usually used its own in-house engravers.

As an exhibit at the Nevada Museum of Art in Reno, Nev. that runs through May 20 demonstrates, Tiffany has a long history of decorating firearms and edged weapons. According to the museum’s press release, Tiffany’s production of fine guns and swords began in the 1850s and peaked during the Civil War, then underwent a revival between 1982 and 2001.

RARE TIFFANY & CO. ARMS ON DISPLAY AT THE NEVADA MUSEUM OF ART IN EXCLUSIVE, SINGLE-VENUE EXHIBITION

The most distinguished name in decorative firearms in America is Tiffany & Co.–a surprise to those who might otherwise recognize the firm as a legendary purveyor of fine silver, jewelry and luxury objects. Founded in 1837 by Charles Lewis Tiffany, what became Tiffany & Co. commenced business just one year after the young inventor Samuel Colt registered his new designs for revolving pistols and long arms with the U.S. Patent Office. In the 175 years since then, the paths of Tiffany & Co. and Colt crossed many times. Among the other American gun makers with ties to Tiffany & Co. are Henry Deringer, Winchester, and Smith & Wesson.

“The magic of Tiffany & Co. arms drew clients the likes of Theodore Roosevelt,” states R. L. Wilson, Curator of Firearms for the Robert M. Lee Collection, “and inspired the creative instincts of the firm’s designers, from the first objects of the mid-19th century, continuing up through modern times. The Robert M. Lee Collection showcases some of Tiffany’s most exquisite pieces.”

Tiffany’s production of presentation swords and fine guns began in the 1850s, reached a peak during the Civil War period (c. 1861-65), and continued through the close of World War I (c. 1918). The art of Tiffany & Co. arms was revived c. 1982, and remained active until c. 2001, with innovative modern era designs created by the firm’s Corporate Division. The Tiffany & Co. items in this exhibition span just over a century — they were made as early as 1893 and as recently as 1994.

_All of the rare arms in this exhibition are featured in a series of books being published by Yellowstone Press, under the umbrella title The Art of the Gun. The first book in the series, Magnificent Colts Selections from the Robert M. Lee Collection, is available in the Nevada Museum of Art’s Museum Store.

**Among creators of the exquisite decorations on Tiffany & Co. arms was Paulding Farnham, considered by many to be the firm’s premier designer. The elaborate sword in this exhibition, featuring embellishments by Farnham, was presented to Admiral Robley D. Evans, Commander of the U.S.S. Iowa in the Battle of Santiago, a major victory in the Spanish-American War._

**Certain pistol handle types made in the 19th century are identified by collectors as “Tiffany grips.” These were sometimes manufactured by Tiffany & Co., but most were produced by other firms, primarily in New York City–such as Schuyler, Hartley & Graham, military goods dealers and distributors. A Police Colt with Mexican Eagle Tiffany & Co. grips is featured in this exhibition.

**Tiffany & Co. was renowned for its skills at etching, and a cased and inscribed pair of silver- and gold-finished, elaborately etched, Colt Model 1861 Navy revolvers–presented to frontier hero Wm. “Buffalo Bill” Mathewson–is included in this exhibition.

The objects included in this exhibition are from the private collection of Robert M. Lee. Exclusive sponsorship of Tiffany & Co. Arms from the Robert M. Lee Collection provided by the Wayne L. Prim Foundation.

Click here for full-sized photos and descriptions of these beautiful guns.