Mostly, I am of the school of thought that it’s best to make a turkey come look for you rather... 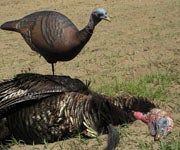 Mostly, I am of the school of thought that it’s best to make a turkey come look for you rather than put out a decoy that might make him hang up or even walk away. Nevertheless, I always have decoys in my gamebag just in case I am staking out an open field, especially late in the season when hens are not interested in going to toms. This year I used the new Primos P.H.D. (pocket hen decoy, about $55). It’s an inflatable hen with a non-shiny cloth photoprinted skin that shows iridescent feather detail.

The decoy squishes down to pocket size. It weighs very little, and while Primos says it inflates with three breaths, it takes me five or six. Still it only takes a few seconds to get it blown up and ready to hunt and even less time to deflate it and stow it in your vest.

It moves easily in the wind and looks very real – at least it does until a real hen comes and stands next to it, as one did on my hunt the other day. Then it looks kind of goofy compared to a live bird. However, what I think doesn’t matter: the hen thought the P.H.D. was real, as did this gobbler, who strutted all the way across a field to it. This picture was taken in bright midday sun, yet the cloth doesn’t shine which I had wondered about when I first saw this decoy.

While I still like the basic and cheap Featherflex hen which has fooled thousands of turkeys over the years, the P.H.D. weighs just a little more and looks better.