Forbes Model 24B Rifle: A Light Gun at a Great Price 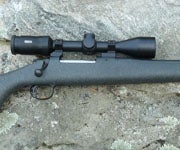 Melvin Forbes started Ultra Light Arms (now New Ultra Light Arms) in 1986, and is still very much in business, which is a towering tribute to the quality of his rifles. Small gunmakers riseth up and are mown down, but Melvin is still turning out the best truly light hunting rifles in the world.

What stands between a New Ultra Light Arms rifle and most shooters is the price. It’s a handmade gun, and the basic Model 24 NULA is $3,600 before options, which are many. And so, because Melvin is a man of the people, he has found a way to get his rifles into the hands of the many at a price of $1,400, which puts it in the upper tier of factory rifles.

The Forbes Model 24 B consists of the same Kevlar/graphite stock, made by Melvin, a CNC-produced action turned out by Titan Machine Products in Maine, a Timney trigger, and a Shaw barrel instead of a Douglas. The barrel comes in 24 inches only, #2 contour, and at present the rifle is available only in .270 and .30/06, right-hand only, and one stock color, gray. Its weight is 5 ¼ pounds, and until you heft one, you can’t imagine how light that is.

Picking up a Model 24B is jarring because the rifle has not been hacked, chopped, gouged, bobbed, or otherwise mutilated to achieve that extraordinary weight. It’s a full-sized gun, and looks like a full-sized gun, so you don’t expect it to weigh that little. The stock is only a pound, and there is not a fraction of an ounce extra anywhere else. It’s extremely durable (Nosler had a NULA action on a test rifle and put a million rounds through it before it got tired.), accurate, and foolproof.

After some snorting and farting on everyone’s part, I got my hands on a production rifle in .270, and am pleased to report that it shoots as well as any of the $3,600 NULAs. Due to the very limited time I could keep it, I went directly to handloads, and found that I could get groups of .589-inch with 150-grain Hornady SSTs, Federal 215 Primers, and H4831. Even by the unearthly accuracy standards of the newest rifles, this is about as good as it gets.

Two words of caution: The Shaw barrel is pretty rough and collects copper very quickly, so be advised that unless you clean your Model 24B with great vigah, it will quickly cease to shoot well. Second, rifles this light place an extra demand on you; every little twitch or jiggle is magnified because you don’t have 8 or 9 pounds of gun to absorb it. If your marksmanship basics are not up to snuff, you might want to buy something heavier.

I’ve owned a number of ULAs and NULAs over 20-plus years, and have hunted just about everywhere and everything with them, and except for the stamp on the receiver, I can’t tell the difference between the Model 24B and my guns. It’s still the best light big-game rifle around…but at $2,200 less.