People ask me about affordable break action guns. I usually tell them to buy used because there just aren’t many... 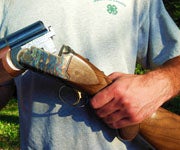 People ask me about affordable break action guns. I usually tell them to buy used because there just aren’t many good ones around (CZ is about it). Now there’s another to add to the short list: the Franchi Instinct.

Besides restyling its semiautos, Franchi revamped its O/U line, introducing the Instinct L and SL. Part of that restyling involved shrinking the pricetag significantly. The Instinct L has a steel receiver, the SL has a lightweight alloy frame.

I have been shooting a 12 gauge, 28-inch barreled Instinct L lately. Mine weighs 7 ¼ pounds (quite a bit more than advertised, but that’s okay. If you want a very light gun there is the SL) and it balances and points fairly well. It has 2 ¾ and 3-inch chambers, a barrel selector on its automatic safety and mechanical triggers.

In rethinking the O/U line, Franchi wisely got rid of the Euro-style recoil pads that ruined the otherwise traditional lines of their guns. The Instinct L has a traditional black rubber pad that goes well with the rest of the gun’s look, which you would have to call “plain-traditional.” This gun has satin-finished walnut, decent wood to metal fit and clean checkering on its fore end and Prince of Wales grip. The receiver has only a little bit of engraving, which is okay, because the receiver is case colored, and the stripey blues and browns provide all the decoration this gun requires. The ejectors and monoblock are jeweled, which is always a nice touch on a break action.

The gun comes with three choke tubes and a discreet orange bead. It works, it shoots straight, and it lists for $1,049. I have seen it in stores for $999. At that price, it is a good deal of gun for the money. The lighter, silver-receivered SL sells for $1,349.

A few different manufacturers over the years have told me that when people buy O/Us they want a gun that has lots of nice engraving; they want to feel like they have stepped up, or even “arrived.” Fine. I have some guns like that, but sometimes you just want to take a break action gun hunting without worrying about it. You want something reliable and not fancy that can wear the honest scars of a hard hunt without ruining its looks or upsetting you – a “working O/U” as it were. The Instinct L would be that kind of gun.