On my way back from hunting in Uruguay a few years ago, I met a group of hunters from Mississippi... 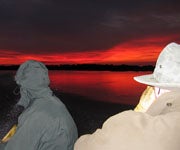 On my way back from hunting in Uruguay a few years ago, I met a group of hunters from Mississippi who had been shooting doves around Cordoba, Argentina. One of them asked me about my trip. I told him it was a mixed bag hunt for ducks, pigeons and perdiz. He asked how many rounds I had shot.

“That’s not very high volume,” he said with disdain. “Check this out.” He pulled up his shirt to show me a bruise the size, shape and color of a tenderized magnum eggplant covering his shoulder and half his chest.

It is summer and if you want to hunt birds now you need to go to South America. If you go, consider a mixed bag hunt instead of a 1,000 dove-a-day marathon. You will still shoot more than most folks shoot in a full season at home and come home unbruised by the experience. I have done it twice, once in Uruguay and once in Argentina. Mixed bag shoots consist of ducks in the morning, then breakfast, then massive lunch and naps, then either perdiz, pigeons or doves in the afternoon, followed by more eating, plus wine. It is an easy schedule to take and South America is a fascinating place to visit. The picture above is of the sun rising over the Parana River in Argentina.

South America has a tremendous variety of bird life, and nowhere do you see more of it than in the marshes. The big duck is the rosy billed pochard, but you may shoot seven or eight varieties of duck (only the cinnamon teal is common to both North and South America). You will see birds like the crested screamer, which is huge, has spurs on its wings and looks like Rodan, the winged Japanese movie monster. Duck limits do exist, although they are often imposed by the outfitter: in Argentina, the camp limit was 20. In Uruguay we were given three boxes of shells and told to shoot until we ran out.*

Shooting doves in South America is very similar to shooting doves here, except when you shoot 15 down there, you’re just getting warmed up. On an afternoon dove hunt you might shoot 1,000 rounds if you are really ambitious. However, as the slowest reloader in the group that went to Argentina, I shot 12 to 13 boxes** in an afternoon, with breaks to hang out and practice my Spanish with the bird boy. No birds went to waste: there are a lot of poor people in South America. We ate many birds ourselves, and I brought a cooler of doves and ducks back with me from Argentina, too.

The spotwing pigeons are hunted in grain fields, sometimes over decoys. They are toughest birds I ever shot. No matter how hard you hit them, if you don’t break a wing or hit the head, they don’t stop flying.

The perdiz – correctly known as the spotted tinamou – is South America’s upland bird. You hunt them in very short grass habitat over pointing dogs in the same cover where you will often see ostrich-size rheas running around. Perdiz look like a tall, skinny quail, and run like little pheasants. You can shoot 10 or so a day, and sometimes you have to walk a long way to do it. I will always remember flushing one, raising my gun and thinking, “I better not shoot. I don’t want to hit that rhea over there.” That’s when you know for sure you’re not in Kansas anymore.

*Yes, ducks are often baited and it is legal. The whole South American hunting experience is so different from what we have at home you just accept baiting as part of it.
**Another reason to go on low-volume hunt in South America: typically outfitters charge $10-12 extra per box of shells. It adds up.