First the good news, then a small rant. Winchester just announced the addition of the 20 gauge Featherlite to the... 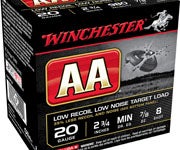 First the good news, then a small rant.

Winchester just announced the addition of the 20 gauge Featherlite to the AA line and that is a Good Thing. The 20 gauge Featherlites have 7/8 ounce of shot at just 980 fps. The slow velocity makes them very soft shooting and, because they are subsonic, they are quieter, too. They are great training loads for kids, new shooters, and even experienced shots who don’t like getting kicked.

I have shot straights at skeet with the 12 gauge, 15/16 ounce, 980 fps version. I never noticed a difference in how I led the targets or how they broke but I did feel and hear the difference when I pulled the trigger.

The 20 gauge load previously existed, but in a cheaper, less reloadable hull than the AA. The best thing about these new loads is that they now qualify for the excellent AA $2 a box rebate bringing the price down into line with most cheap target loads and leaving you with hulls you can reload or sell to boot.

Which leads me to the rant: I see lots of new shooters show up at the range with 3-dram, 1 1/8 ounce budget 12 gauge loads or regular 7/8 ounce 20 gauge loads and very light youth pump guns. The main thing these new shooters learn is that shotguns kick painfully.

What manufacturers really need to do is make super light loads in cheap 100 packs to sell at Wal Mart, because that is where 98 percent of Americans buy their ammo, and they buy it according to the number on the price tag rather than any other spec on the box.

The 100-pack “training loads” should be sold in both 12 and 20 gauge and contain 7/8 ounce of shot in 12 gauge and ¾ ounce in 20 gauge and both should run about 1150 fps. They would be painless to shoot and, because ammo makers would save on shot costs with the lighter payloads, cheaper to load, as well.

You would have to mark them NOT FOR USE IN SEMIAUTOS* in big letters and be prepared for the inevitable complaints and returns from people who don’t read the big print, but it would be worth it to start more people with less recoil.

It would benefit hunter ed and scout camp shooting programs too, if superlight trainer loads were available for the same price as other cheap target loads. Way too many kids start out at hunter ed and scouts shooting an 870 youth gun with a buttpad as hard as a hockey puck and ammo that kicks.

Will we see low recoil 100 packs? It would be nice to think so, but it’s probably not going to happen. The public believes “more is more” and retailers don’t want people returning ammo because it doesn’t cycle the semiauto they haven’t cleaned since last year. In the meantime, try some of these AA Feathers if you haven’t shot them before.

*Even though many new semiautos will cycle loads that light after they break in. And, I guess the box could also say MAY NOT RESET INERTIA TRIGGERS OF SOME O/US but that is lot of big print.