At the January SHOT Show, the folks from Zeiss showed me a new line of scopes called the Conquest Duralyt,... 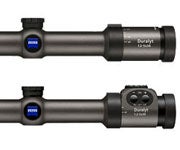 At the January SHOT Show, the folks from Zeiss showed me a new line of scopes called the Conquest Duralyt, which are at the high end of the company’s price scale, built on 30mm tubes, and are backed by Zeiss’ you-break-it-we-fix-it-period warranty. There are three in the line: a 1.2X-5X, 2X-8X, and a 3X-12X. The Duralyt which I ogled was a 1.2X-5X variable with Zeiss’ new illuminated reticle, which Zeiss designates as Reticle 60, Illuminated. (What else would you call it?)

It’s based on the German 4A pattern, but is considerably finer than the classic version and I said thanks, but I don’t like it; with the red dot shut off it won’t guide your eye to the center of the image as the heavier crosswires do. Zeiss sent me one nonetheless, and after brooding a while I decided to test Reticle 60.

For targets, I used the unique Big Five series printed by Safari Press. These show large African animals against their natural backgrounds, and like the real thing, they present a challenge. To shoot at one you first have to pick out the critter, and then get the crosshair where it needs to be. Bull’s-eyes they ain’t.

I set up the targets at 25 yards and fired five rounds at two different targets, every shot timed by a stopwatch. My test rifle was a Ruger Scout, which is a very quick-handling little gun. First, I fired 5 rounds with a very high-quality American scope equipped with medium crosshairs and a circle in the middle. I’ve used just such a reticle on Cape buffalo at very close range, and consider it the bee’s knees. The scope was set at 2X. The average time per shot was 1.964 seconds, and I had three fatal hits.

Then I swapped off for the Zeiss, also set at 2X, and got an average of 1.792 seconds per shot, along with five fatal hits. Was I mistaken about Reticle 60? Was Custer mistaken at Little Big Horn?

The reason for the Zeiss’ superior performance lies in the fact that the top half of your field of view is clear. No reticle wires means you can see better. The other cause was the Zeiss optics, which are simply stupendous–much sharper, much brighter than even the Very Good American Scope.

Reticles notwithstanding, I believe a red dot at the intersection of the crosshairs is the fastest way to aim, period, and the Zeiss dot is a paragon of perfection. It does everything you want it to.

The real world price for the Duralyt with the illuminated reticle is just under $1,300 (non-illuminated is $200 less) and, as we lurch along in what is now openly being called a Depression, it’s fair to ask, is the Zeiss really twice as good as a $650 scope? Twice, I don’t know. I can tell you that optically it’s in an entirely different league from any $650 scope I’ve used. I can also tell you that if I were building a dangerous game rifle, or a rifle for hunting inside 200 yards and price were no object, the Duralyt is where I’d go.