Earlier this year I shot my first ever 1-inch, 100 yard group with shotgun slugs.* That it took me until... 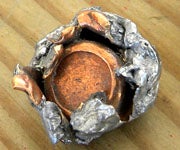 Earlier this year I shot my first ever 1-inch, 100 yard group with shotgun slugs.* That it took me until 2012 to achieve that feat is more a reflection on my lack of bench shooting skills than the state of the slug shooting art. The slugs and guns we have today are quite accurate.

The gun I shot the 1-inch group with was a Savage 212, a bolt action with Savage’s excellent Accu trigger. The slugs were Remington Copper Solids which are my go-to slugs when I want to shoot a good group out of almost any gun. I had a Bushnell 3x-9x slug scope mounted on the gun. I didn’t much care for the 212’s plastic detachable box magazine or its general lack of slickness but the gun is very affordable ($606), has the aforementioned great trigger, and it really, really shoots.

As I mentioned previously, the H&R/NEF Ultra Slug Hunter with a heavy barrel is a very accurate slug gun, as is the gun I shoot, an Ithaca Deerslayer III. I can always get Remington slugs to shoot. Winchester XP3s and Hornady SSTs are quite accurate, as are Federal’s new Trophy Copper slugs.

I have had mixed results with rifled choke tubes. When Browning first introduced its BPS slug gun it came in a choice of fully rifled or rifled choke tube smoothbore model. The choke they designed for it was at least five inches long. With it and BRI slugs I shot a 1 7/8″ five shot group at 100 yards. That was back in the early 90s and it was a huge deal to shoot a group like that with a slug gun then. As I remember, that gun and choke tube shot nothing much worse than 2 ½”. On the other hand, shorter rifled tubes have not delivered groups anything at all like that the few times I have shot them.

Shooting sabot slugs out of a smoothbore is a waste of money. You need rifling spin to help the bullet and the sabots separate cleanly and to stabilize the bullet. Some will go where you shoot them with a smoothbore (in my youthful ignorance I shot a deer with a BRI slug out of my smoothbore Auto 5 at 100 yards and killed it instantly) but others will tumble and fly far wide of your aiming point.

However, when you match the right slug to the right gun, the results are very impressive. The North American Slug Shooting Association holds postal matches for shotgun slug shooters. They shoot five-shot, 100 yard groups from a bench and their record group is .787″ made with an 870 with a Hastings rifled barrel, Hastings Laser Accurate slugs and, surprisingly, an Aimpoint red dot.

Realistically, you should be thrilled with any gun and slug that groups under 2 ½” at 100 yards with sabot ammunition and there are many that can do it. Maximum responsible range for sabots lies between 125 and 150 yards, although when the XP3 and SST slugs first came out I shot eight-inch groups with both at 200 yards just to see if it could be done. And, on the right day with a good rest, it can be although I would not recommend 200 yard shots at deer. Nevertheless, since sabot slugs and rifled barrels came along we have doubled the accurate, effective range of the shotgun for deer hunting. That is progress.