_by Phil Bourjaily _ Writing about left-handed guns invariably means 85 percent of your intended readership rolls their eyes and... 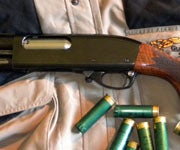 Writing about left-handed guns invariably means 85 percent of your intended readership rolls their eyes and read Whitetail 365. But, you get the undivided, even rabid, attention of the other 15 percent.

The numbers vary, but about 10 to 15 percent of us are left-handed. Then there are those, like my older son, who learn to shoot on the side of their dominant left eye. So, the number of people potentially interested in this post may be higher than I thought. Anyway, here goes:

Seven or eight years ago F&S sent me to Gunsite Academy to learn how to shoot rifles, figuring I could write a “fish out of water” type story about it, which I did. I also became a deadly – and quick – rifle shot in two days, learning to hold on to the right-handed Steyr Scout rifle with my trigger hand while reaching back to work the bolt with my front (right) hand.*

Anyway, learning to do that was hard. Shooting shotguns left-handed is easy. I have shot right-handed semiautos since I started shooting, and only once did I notice an empty hull flying across my line of vision. I did get a flake or two of powder or something in my eye over the years, but that ended once I started wearing shooting glasses.

As a lefty, I think it’s easier to load a right handed gun: you hang onto it with your trigger hand and drop a shell in the port with your right hand. I have had lots of practice reloading and shooting fast like that, sloshing through the water pulling shells out of my pocket while chasing and finishing off crippled ducks. I have a couple of left-handed 870s, and they confuse me when I pick them up.

Then there is the matter of cast, the lateral bend in a gunstock found on a lot of European guns designed to put your eye squarely over the rib. My face is thin – some would say gaunt – enough that I can pick up a gun bent the wrong way for me with right handed cast and shoot it without noticing anything backwards about it. That is not true of everyone, I know, but I do think some shooters obsess over cast the way some obsess over a few thousandths of an inch of choke constriction. They might find they can shoot a gun cast backwards better than they think they can.

That leaves safeties. I have hunted with right handed safeties on borrowed guns many times, and while I don’t like it, I have gotten by. Some left-handed shooters can reach under a trigger guard with a finger and click off a right handed safety so fast they come to prefer that method, but I want my safeties reversed. Not all guns do reverse easily. The best are the Browning Maxus and Gold safeties, which can be changed in a minute. Old-style Beretta safeties are easy to switch, and Benellis aren’t too hard (props to Benelli for making more left-handed guns than anyone else, even though my Benellis are right-hand models). Remington 870/1100/11-87 inexplicably require the purchase of a different safety button, and some guns (Remington 887 and the otherwise excellent Weatherby SA-08) can’t be reversed at all, which pretty much rules them out of my consideration.

*I was fast and deadly at the end of the class. Then I came home, didn’t pick up a rifle again for a few years, and when I did, I was right back to my old pre-Gunsite non-deadly self.