Crown Royal Bags Are Very Useful, Even as Weapons and Sandbag Rests

Crown Royal bags have a cult following. There are contests and websites dedicated to the things people keep in Crown... 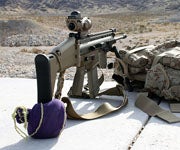 There are contests and websites dedicated to the things people keep in Crown Royal bags, and they are very handy for us hunters and shooters, too. You can use them to keep the removable trigger of your high-end shotgun, use them as sandbag rests and muzzleloading possibles bags, and I have heard of people storing pistols in them. I can only imagine they are perfect for fishing reels and other pieces of outdoor gear as well.

Until recently, I had never heard of anyone weaponizing a Crown Royal bag.

According to the Iowa City Press Citizen, Tony A. Maples Jr., upon being kicked out of his apartment on Aug. 2, 2012, “returned to the apartment armed with a Crown Royal bag filled with rocks. Police said Maples pounded on the door of the apartment building until someone let him in, then hid in the laundry room. When Maple’s intended target entered the laundry room, Maples allegedly assaulted the man with the bag of rocks. Maples continued assaulting the man until the rocks fell out of his bag. He was located by deputies near the building and appeared to be intoxicated.”

I bet you didn’t see the part about alcohol being involved coming, did you? Anyway, maybe it’s just me, but I would think you would pull the little drawstring tight and tie it after you filled the bag with rocks if you were trying to make a Crown Royal bag into a sap.

What do you keep in your Crown Royal bag?