In my post of May 13, I touched briefly on high pressure, undesirability of, and I think it’s worthwhile to... 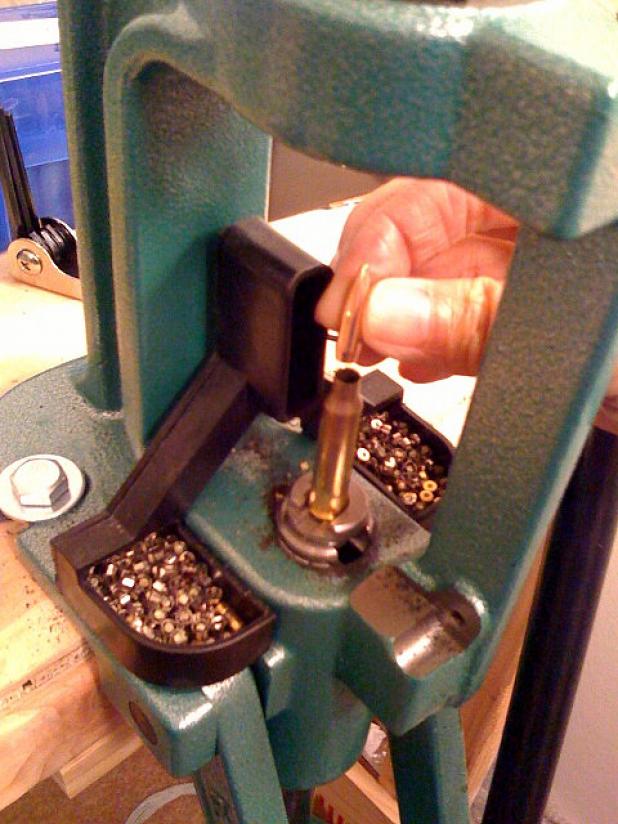 In my post of May 13, I touched briefly on high pressure, undesirability of, and I think it’s worthwhile to elaborate on that. As a rule, if you manage to blow up a gun, you are guilty of such horrendous negligence that you should not have owned a gun in the first place. The corollary to that is that most modern rifles are enormously strong, so if you do manage to generate enough force to shatter one, the results will be dire.

If you’re a handloader, excess pressure is not something that sneaks up from behind you in the night. There are several warning signs that you are getting in over your head. First is cratered primers, although this is not infallible. Second is primers that are flattened, or are bashed so flat that they fill the primer pocket. Third is difficult extraction. Fourth is case head expansion that you can measure with a micrometer. Usually, you get a couple of these symptoms simultaneously.

The first indication that you’ve Gone Too Far is almost always a blown primer. When this happens, you’ll see smoke coming out the breech of the rifle. There’s a good chance that you’ll be unable to open the bolt and that if you can, you may be unable to extract the case. You may be able to get it out by putting a few drops of oil down the muzzle and standing the rifle on its butt so the oil drools down and lubricates the stuck case. Then pound it out with a ramrod. You’ll note that the primer pocket is scorched and that the blown primer is rattling around in the action somewhere. Find it and remove it.

If you’d really like to get in trouble with no warning at all, use the wrong powder. If, for example, your handload calls for 70 grains of ultra-slow-burning RelodeR 25 and you pick up the canister of fast-burning RelodeR 7 and load 70 grains of it, something very interesting is going to happen when you pull the trigger and–with no prior notice. You can also throw the wrong charge by relying on your memory. Never rely on your memory. Make notes, and follow them.

Odd as it may seem, you can detonate a rifle by throwing half charges, or greatly reduced charges of slow-burning powder in big cases. The term I’ve heard for this is “Secondary Pressure Excursions,” and the best explanation for it is as follows:

When a partly-full case lies horizontally in the chamber the powder lies along the lower part of the case, and when the primer flame enters the shell it skims along the surface of the charge, causing it to ignite very slowly. This generates enough force to move the bullet out of the case neck and into the rifling, but not enough to make it clear the barrel. As the bullet is getting nicely stuck in the bore, the charge continues to burn, but because the bullet is not going anywhere, pressure rises exponentially and the rifle comes apart.

This may or may not be a perfect description, but the fact remains that guns have blown with no other plausible explanation. Whenever I load a cartridge with slow-burning powder, I check the case after throwing the charge to see that it’s as full as it should be.

For those of you who would like to read more on this, and on exploding rifles in general, there are two excellent chapters in Volume Two of P.O. Ackley’s Handbook for Shooters and Reloaders. In the meantime pay attention to what you’re doing.