Know what a chupacabra is? Neither does anyone else, but the goat-sucking creatures of legend and cryptozoology have been spotted... 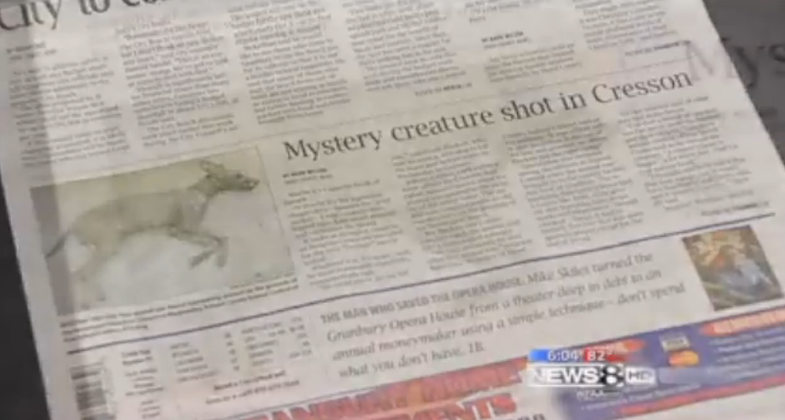 Know what a chupacabra is? Neither does anyone else, but the goat-sucking creatures of legend and cryptozoology have been spotted in Texas.

From this story on ABC News:
In the past week, two mysterious, coyote-like creatures have been spotted in a 10-mile stretch of north Texas, WFAA, the Dallas/Fort Worth ABC affiliate, reported. Some of the locals say the unidentified animals could chupacabras, the “goat-suckers” of local legend. (The name chupacabra means “goat sucker” in Spanish.) David Hewitt, 25, a Hood County man who killed one of the animals, told WFAA he’s never seen anything like it.

“From a distance, he looked like a hairless chihuahua, only much bigger,” Hewitt said. “From all indications, it seemed to be a chupacabra.” “The claws, toenails, nothing like I’ve seen on a coyote. Skinny, pointed tail; sure looks like a possum to me,” he said. “Never seen any kind of animal that doesn’t have hair on it.” Hewitt is hardly the first Texan to think he’s seen the curious-looking creature.

Benjamon Radford, managing editor of Skeptical Inquirer and author of a forthcoming book on the myth of the chupacabra, said in the past five or so years, there have been about seven alleged sightings in Texas. According to WFAA, animal control experts haven’t identified the creature, but Radford says he is fairly certain that he knows what DNA tests will reveal. “What happens is that these things people are finding are mangy canids – dogs, foxes, coyotes,” he said. “They have sarcoptic mange, a contagious skin disease that affects many dogs and it’s caused by mites on the skin and it causes hair to fall out.”

Make sure you check out the videos in both links. Then tell me, goat-sucking monster, mangy coyote or some seriously ugly dogs?