Two Michigan men out for a day of steelheading instead reeled in this pair of massive bucks that drowned while... 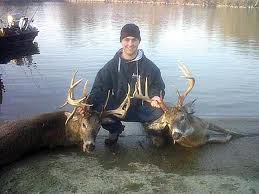 Two Michigan men out for a day of steelheading instead reeled in this pair of massive bucks that drowned while fighting.

From this story on freep.com:
Two Berrien County men ended up with more than fish during a trip earlier this week on the St. Joseph River. Royalton Township resident Bryan Ammeson and St. Joseph resident Scott Stoney were fishing for steelhead from a boat Wednesday when they spotted a pair of bucks fighting near shore. The bucks’ antlers locked and they fell into the river and drowned. ” I ended up hooking them up to the side of the boat and we took them back to shore, Ammeson said. “One ended up being a 17-point with two drop tines, and another one is a perfect 10-point rack that’s just absolutely massive.”Everybody that I’ve showed this to so far has said that’s one of the biggest deer they’ve ever seen.”

_Ammeson said he tried unsuccessfully to reach officials with the Michigan Department of Natural Resources and Environment. He contacted Benton Township police and obtained a pair of carcass permits so he could claim the animals legally. Ammeson has photos, and police back up his fish tale. “They were both two huge bucks,” said Benton Township police Lt. Delmar Lange. Ammeson said the bucks were processed for meat, but the heads will be mounted with the antlers interlocked.
_