I’m going to the dogs this weekend, which means I’m off to the National Pheasant Fest and Quail Classic in... 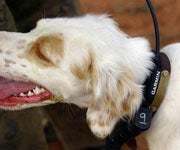 I’m going to the dogs this weekend, which means I’m off to the National Pheasant Fest and Quail Classic in Kansas City, which, unlike SHOT, remains mostly a zombie-free zone. There are, however, tons of upland hunting, gundog and conservation-related vendors and speakers at the trade show. So if there are any training questions you’d like me ask, products you’d like me to keep an eye out for or gundog breeds (there are dozens of breed clubs at the show) you’d be interested in learning more about, be sure to tell me in the comments section.

In the meantime, here’s an interesting story that dovetails nicely with my last blog post on GPS technology. South Carolina lawmakers are considering a bill that would make it a crime for anyone other than a dog’s owner to remove its GPS tracking collar.

From this story in the Augusta Chronicle:

The sometimes malicious dispute about hunting dogs running loose edged closer to a resolution Wednesday, when lawmakers agreed to advance a tougher law against vandals. At issue before a South Carolina Senate panel was how to punish people who remove or destroy the electronic collar or device a hunter has placed on a hunting dog. The Senate Agriculture and Natural Resources Subcommittee approved the bill, H. 3372, to make it a misdemeanor amid questions about the problem it targets. Rep. Bill Hixon, R-North Augusta, the bill’s sponsor, said he was told by a colleague about a Myrtle Beach man who prides himself on removing hunting dogs’ electronic collars, placing the devices in plastic bags and floating them down a river. The dog owners chase the signal, thinking they are drawing closer to their missing dogs.

Hixon also pointed to an open case in the Upstate, in which a man killed another man’s dog, chopped up its electronic collar and buried the pieces in a tree stump. Authorities charged the man with killing the dog but had no recourse against his destruction of the animal’s collar. Under Hixon’s bill, the penalty for a first-time offender would be a $500 fine or up to 10 days in jail. On Wednesday, the Senate subcommittee sent the bill – and an amendment that would require hunters to put contact information on their dogs’ collars – to the full committee to vote on each piece.

Thoughts? At some $200 a pop for a replacement collar, I would think that intentionally removing a dog’s GPS collar is a pretty clear-cut case of theft/vandalism, and would be illegal, anyway. And if said action ultimately led to the death of a dog there might well be other charges, too. What do you think? Good idea? Bad? What about from the landowner’s perspective? If you find a dog running on your property what legal rights do you think you should have?