A few weeks ago, I was out doing a little training with my graying, soon-to-be nine-year-old chessie. We were working... 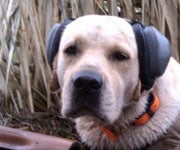 A few weeks ago, I was out doing a little training with my graying, soon-to-be nine-year-old chessie. We were working on long blinds (something she’s never really excelled at). As she began to drift off the line I had sent her on, I gave her a sit whistle, which she ignored as if she hadn’t heard it.

“That’s not like her,” I thought as I gave her another, louder whistle, which she promptly obeyed as she usually does. I knew she probably hadn’t heard that first whistle, but at the time I chalked it up to the distance involved, the fact that we were working into a stiff, howling wind and a somewhat wimpy first whistle blast on my part.

But maybe she didn’t hear me because, well, she’s slowly going deaf? Many of us probably don’t give much thought to our dogs’ hearing, but considering how often their ears are subjected to close-range shotgun blasts, maybe we should. In a bit of serendipity, not long after I began wondering about my old dog’s hearing loss, I received an e-mail from Phil Bourjaily alerting me to the existence of a product I must admit I never knew existed.

They’re called Mutt Muffs and they’re exactly what they sound like: hearing protection for canines. The muffs come in sizes to fit dogs from 10 to 100 pounds, and the maker claims dogs get used to wearing them very quickly. It’s an interesting, if novel, concept. Obviously, Mutt Muffs are not going to do anything to reverse hearing loss, but theoretically they could certainly prevent further hearing loss, or, if you started early enough, eliminate it altogether.

I’m not sure it’s something I would use with my pointing dogs in the field, but I could certainly see the benefit of canine muffs within the confines of a duck blind. And as Phil pointed out, he would have loved to have had a pair for his setter, who apparently did not like thunderstorms.

What do you think? Would you use Mutt Muffs if it helped protect your gundog’s hearing? Here’s one satisfied gun dog owner who did. Thoughts?