Chris Brackett Has it Wrong on CWD

A FWS officer samples a deer for CWD. Photograph courtesy of USFWSmidwest/Flickr. Last week, Chris Brackett, host of Fear No... 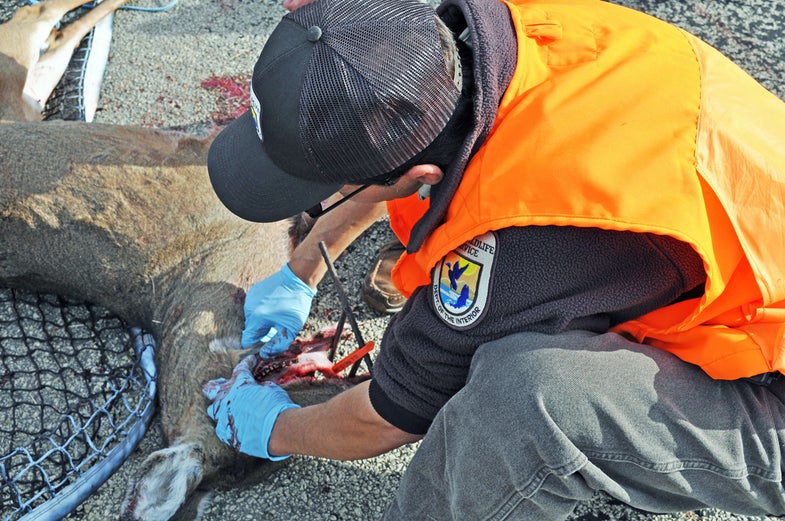 A FWS officer samples a deer for CWD. Photograph courtesy of USFWSmidwest/Flickr.

Last week, Chris Brackett, host of Fear No Evil on the Outdoor Channel, told a reporter for the Pittsburg Post-Gazette that, “There has never been an animal die of CWD (Chronic Wasting Disease).”

Links to the article spread quickly on social media, hunting talk forums, and in other outdoor media outlets. It followed the usual progression of all things controversial in today’s online hunting community.

People who don’t like Chris Brackett attacked him personally and called him names.

People who do like Chris Brackett attacked the non-Brackett fans personally and called them names.

Lost in all that is the fact that a TV hunter used his influence to spread a false message about a disease that threatens the future of deer hunting. That is frightening enough, but what’s even scarier is how many people __are buying it. A writer for Wide Open Spaces wrote, “Brackett’s opinion is one that’s fresh, unique, and perhaps based on different information than what the public has gotten.” He went on to say, “Research continues to be done to find out more about the disease, but this latest statement from Brackett may turn the tables.”

I sure hope it takes a little more than this to “turn the tables.”

Before I get any further, I’ll make it clear that I do know Chris Brackett, and I like him just fine. I’ve worked with him a bit in the past, and in fact, I called him for input on an article only a few months ago. The guy is a knowledgeable hunter and a hell of an archer. He’s entertaining on camera. He frequently takes kids hunting. Those are all good things—but they don’t make him an expert on deer diseases.

“What Chris said is absolutely false,” says Kip Adams, a biologist and director of education and outreach with the Quality Deer Management Association. “It can take several months—or even years—for an infected deer to show symptoms of CWD, but the disease is always fatal. That fact is well-documented.”

A recent study conducted on a mule deer herd in Wyoming showed that CWD is responsible for a 19 percent annual reduction in the herd. At that rate, the researcher predicted that CWD could cause that herd to go virtually extinct in just 41 years.

How many shares from hunters did that CWD article get online?

Brackett’s claims were in the context of a conversation about Pennsylvania—a CWD-positive state—banning the use of deer urine. Since CWD prions can be found in urine, some managers believe its use can spread the disease—but there isn’t conclusive proof of that yet. That’s the big problem game managers face with CWD. So little is known about it that implementing policy to keep it from spreading is difficult—and at times, extremely unpopular with hunters. I certainly haven’t agreed with all of it. But that doesn’t mean the problem isn’t still real—and it certainly doesn’t mean we should ignore the real experts who are telling us this disease is a threat to deer and hunting. Finding a solution absolutely requires more attention and research—and we can’t let false claims from an entertainer distract us from that.