What do ducks and geese see? Whether you’re set up for mallards in a mud hole or sitting on a... 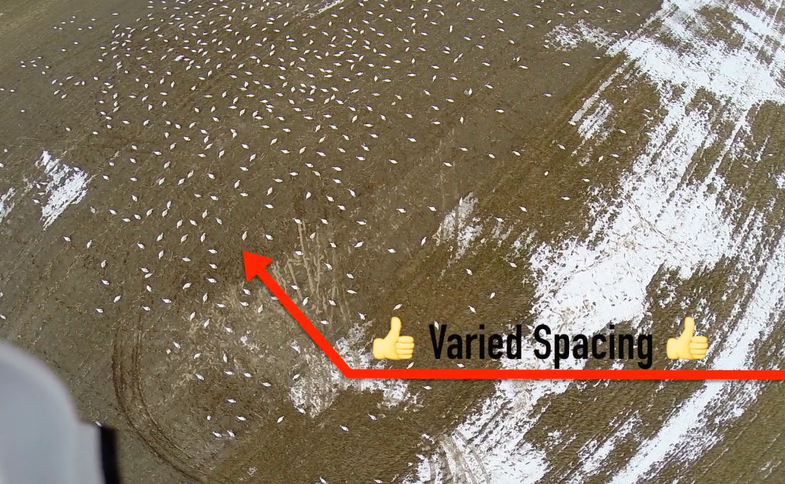 What do ducks and geese see? Whether you’re set up for mallards in a mud hole or sitting on a couple thousand snow goose dekes in cut corn, it’s an eternal hunting question. I figured I’d take a drone out to a snow goose spread and find out.

As I posted last week, I have a solid team of buddies in upstate New York, and for the past two seasons I’ve tagged along on their month-long campaign to kill snow geese. We hunt over everything from a few dozen SilloSocks in muck fields to 1,400 full-bodies in hilltop cornfields. Reviewing drone footage over all types of spreads, there were no lightning-strike moments or silver bullet ideas. Instead the footage reinforced what a lot of good hunters already know, but in glaring 1080p detail.

Vary the decoy spacing. In most cases we threw a large, amorphous spread with little feeder groups broken off at the edges. But after looking at the footage, what’s just as important is not having the individual decoys all the same distance apart.

Keep the blinds closed at all times. In a layout blind in a field, you have to keep the doors closed. We all know that, but after 4 hours on your back it’s easy to get lazy. The drone shows how the unnatural rectangular shadows can be seen from outer space.

Mud is your enemy, maybe? It’s nearly impossible to set hundreds of decoys in a far-off field without a truck or quad to help haul bags. But the muddy tracks they leave behind are like a neon sign to the birds saying, “Don’t land here!”

Don’t wear black. While flying the drone I was dressed in Optifade Marsh camo and a black stocking cap. Walking through the field I looked like the Predator—the camo did such a good job—except for that black dot of a hat. Leave the black clothes at home unless they’re fully concealed by the blind, in which case close the damn doors.

Don’t fly a drone near live birds. I only flew the drone on setup days or before or after the hunt. But after I got some footage of our decoy spread, I wanted to compare it to a live feed. On the drive home, I saw a few thousand geese by the side of the road, and sent up the drone. Geese, of course, are extremely aware of predation from above, so the drone wasn’t even in the same zip code before the birds took off. Yet at one point, they corkscrewed around and buzzed the quadcopter. It was over in a flash, but as you can see in the video, it was a pretty close call.