The first coyote I ever called in and killed fell to a 12-gauge No. 4 turkey load. It was a... 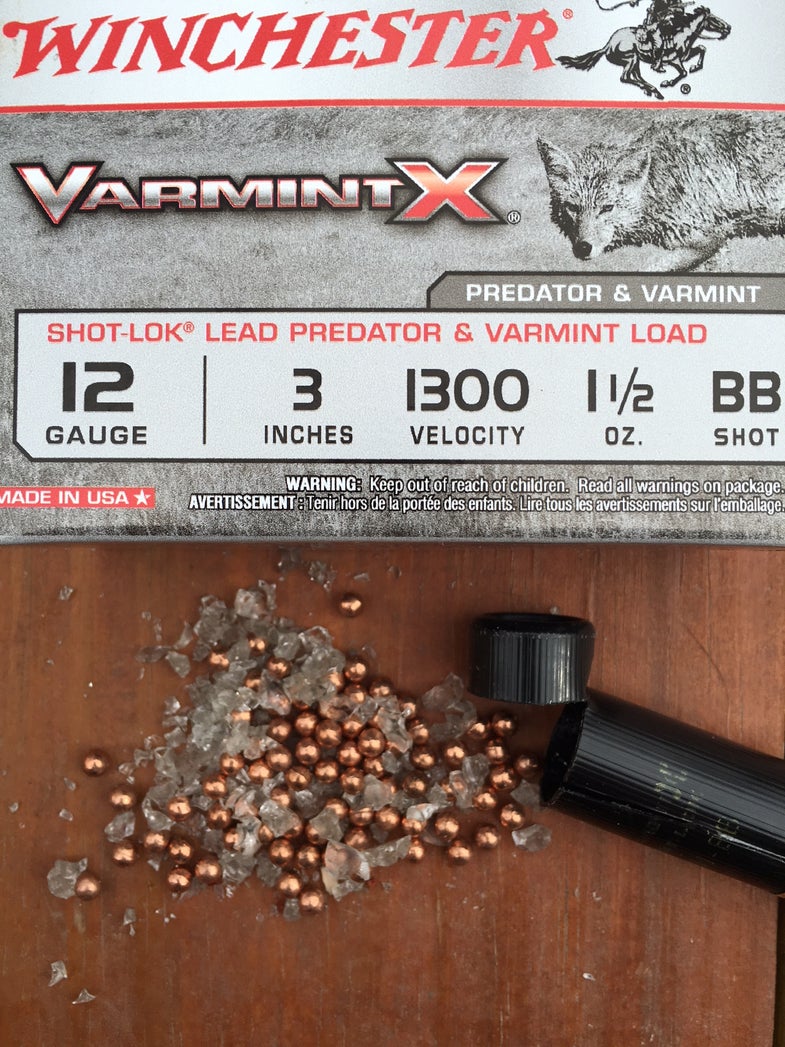 The first coyote I ever called in and killed fell to a 12-gauge No. 4 turkey load. It was a 15-yard headshot, and a .410 would’ve probably gotten the same result. Since then, I’ve used a variety of shotshell and choke combinations on predators, including several sizes of buckshot and a few different “high performance” predator loads with shot sizes ranging from B to T. I’ve seen coyotes, foxes, and bobcats shot with all of that stuff on calling stands in Kentucky, Texas, and Alberta.

Unfortunately, I’ve learned that 15-yard headshots aren’t the norm, and that predators are often wounded and lost with a shotgun. Large eastern coyotes are notoriously tough, but I’ve seen 10-pound Texas gray foxes scurry away after a shotgun blast, too. The large pellets in these loads can be fickle on the patterning board—and there aren’t many of them to begin with. Constricting those big pellets too tightly frequently results in blown patterns with gaps large enough to miss a fox altogether. I’ve seen decent patterns from a factory modified choke go to straight to hell upon switching to a full choke.

So when Brad Criner, Winchester’s shotshell guy, told me his best patterns with Winchester’s new VarmintX loads were through turkey tubes, it got my attention. This is a 3-inch 12-gauge load with an ounce and a half of copper-plated lead BBs. They’ll cost about $20 for a box of 10 once they’re on shelves, which isn’t cheap, but it is about half the price of comparable premium predator loads. That’s a big deal when you consider the frequent patterning issues with such loads noted above.

Of course, it’s only a fair deal if they pattern well. And it turns out, they do. The pellets in VarmintX are held together in the shot cup with a resin that keeps them in a uniform cluster until they exit the barrel. Winchester calls this Shot-Lok technology, and it’s the same thing used in their popular Long Beard XR lead turkey loads, which have set records in still-target competitions. The best pattern I’ve ever personally seen through a turkey gun was with my wife’s 870 and Long Beard XR No. 5s, so I’m a believer in the technology.

I cut one of the new shells open and counted 76 pellets, indeed held together by the resin. The BBs seem to create an ideal blend of pellet count and pellet size (by comparison, there are 41 pellets in a 3-inch No. 4 buckshot load). In my experience, the predators that stay down from a shotgun blast are those hit multiple times in the right place. One lucky hunk of buckshot rarely does the job. On Criner’s advice, I tried VarmintX in my gun through a .660-constriction turkey tube. It was an informal range session, resting the gun on my knee and using just the factory bead. But I was astounded with the results. At 30 yards, every pellet hit in a ragged, 12-inch cluster. For giggles, I fired several rounds at 70 yards (checked with a rangefinder), and was still getting 5 to 7 holes inside a 20-inch circle. That’s iffy on a coyote with such small pellets—but 70 yards is iffy for any shotgun. I’ve never seen buckshot of any size reliably land more than a hit or two at that range. Bottom line, this load should crush coyotes at 50 yards and in, and that’s all you can really expect out of a shotgun.

The calling conditions have simply sucked around here since I’ve been testing these shells, so to date, I haven’t had the chance to shoot at anything but cardboard with them. But the forecast is looking up for this week—and I’ve never had more confidence in a shotgun for predators than I do right now.