Ask Phil: Are Turkeys Affected by the Full Moon?

Photograph by John Hafner I live and hunt in the great state of Iowa, and with turkey season fast approaching,... 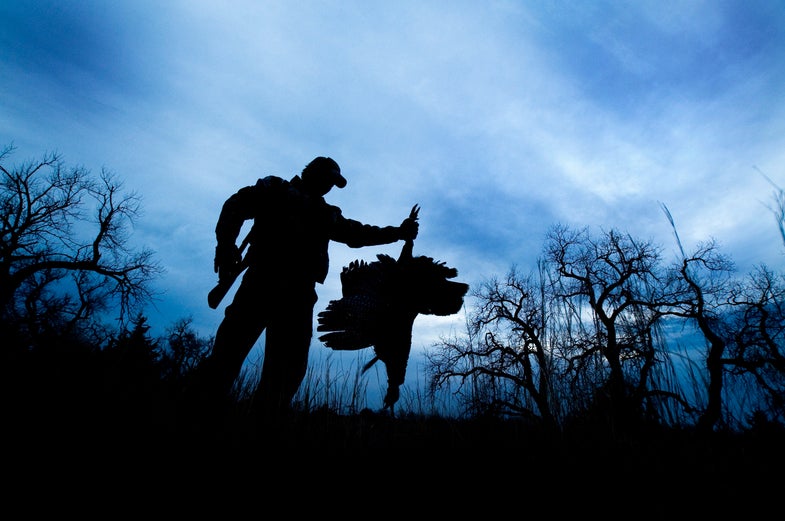 I live and hunt in the great state of Iowa, and with turkey season fast approaching, I need to pick which season I want to hunt. I have a fairly open work schedule so I am free for any of the first three season splits. I hunt on a family friend’s land so I shouldn’t have to worry about other hunters, but my question is: should I be taking into account the phases of the moon and try to hunt during the full moon?

[Iowa requires hunters to choose which season split(s) they wish to hunt, a system designed to spread out hunting pressure.]
—David H.

One of the many things I like about hunting turkeys as opposed to hunting deer, is that when you’re scouting and hunting, you know every turkey track you see was made during the daytime (when you could hunt the bird), while deer tracks may have been made at midnight. Turkeys are diurnal animals, and, as such, I don’t believe they are particularly attuned to phases of the moon. They get up with the sun, they go to bed with the sun. They do not, in my experience, howl at the moon, nor turn particularly crazed when it’s full. Barometric pressure seems to affect them much more. On a nice, high-pressure day, they wake up feeling good and gobble more. I haven’t noticed the same correlation between turkeys and full moons.

That said, you should take a full moon into account. It will light up the woods before dawn and make it easier for roosted turkeys to spot you on the ground. You’ll want to be extra stealthy walking in, and you might even want to set your alarm clock a little earlier in the morning, as you might need some extra time to get where you want to go. I hope that helps.

David, like all of you whose questions I answer, will receive this range bag from Cabela’s.

Bonus question: sometimes I get questions that are out of my area, and here’s one, which is not an “Ask Phil” but an “Ask the Gun Nuts readers”:

Hello, my name is William. I recently purchased a Hi Standard Supermatic Tournament Model 102. I was wondering, could you give me some advice on an ammo to use that’s good for it? I tried CCI Standard Velocity and it coughed up at least one round out of ten. Any help would surely be appreciated.
—William

All I know about the Supermatic Tournament Model 102 is that it came with weights that attached to the barrel for competition shooting, but I know nothing about what kind of ammo it likes. This is one for all of you out there. Anyone out there have some rimfire ammo advice for William?