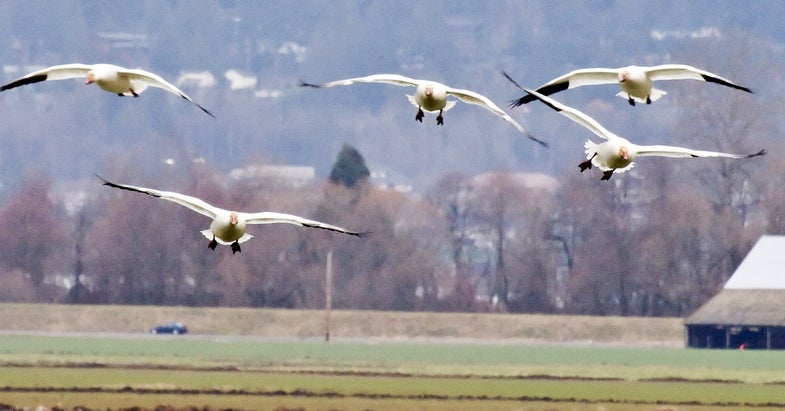 I shoot a lot of geese using 3-inch 12-gauge BBs at 1550 fps, which is pretty much a standard load for big Eastern honkers. Generally, I do well enough: A couple of triples every season and as many days batting a thousand (five honkers for five shots). But windy days can be challenging. ****I try to be set so the geese have to come in over me into the wind. The shots aren’t difficult in those situations, but I’m not putting birds down very well. Does wind do funny things to shot patterns? —O_ntario Honker Hunter_

Good question, and the answer is yes, or maybe no. Here’s the anecdotal answer: Years ago, All-American trap shooter Mike Jordan and I stood up in a pit blind and shot at four snow geese departing straight away in strong crosswind about 40 yards out. I shot at one and stoned the bird flying next to it on the downwind side. Jordan gave his bird some windage, holding off its wingtip, and killed it cleanly. On that same day, I saw someone miss a sitting nutria because, he claimed, the wind moved his pattern. It would seem from those examples that wind can move patterns somewhere between a nutria-width to a full goose-width under the right circumstances.

As for the scientific answer, there’s not much consensus about patterns in the wind when you talk to people smarter than I am about sphere dynamics. Some say the whole pattern moves with the wind, others that it doesn’t, or that it only moves marginally. I have seen tables showing how far pellets drift in a crosswind, too.

Remember, wind is also acting on the target, so, to some extent, any wind drift of pellets would self-correct because the target would move in the same direction. I would be more concerned with how the wind is acting on the target than how it is acting on my pattern, especially if I were shooting big pellets like BBs at geese in a reasonable range. If you have geese coming over you into the wind on a gusty day, they are likely moving slower than you think they are. Subconsciously, you’re in the habit of leading geese at X yards overhead by Y. You might be over-leading them and shooting in front. Try shooting right at their heads, see what happens, and correct from there.

Anyone whose question I answer in this space will receive a Cabelas range bag.